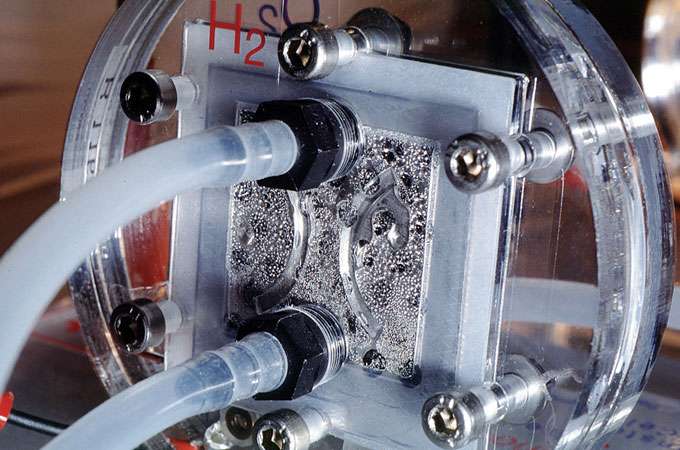 It’s a formula known to dreamers and innovators everywhere: combine food and wine in the presence of good company, and you’ll get an idea — often accompanied by a rough napkin sketch — that might in some small way change the world. In Michael Andreu’s case, a conversation with his brother-in-law over Thanksgiving dinner sparked an interdisciplinary effort to design a small-scale, mobile biomethanol production system that could provide a new source of funding for ecological restoration projects.

Andreu, a PhD student in the College of Forest Resources at the University of Washington in Seattle, recalls that 2002 had been a bad year for forest fires in the western U.S. and his brother-in-law, Claude Duss, wanted to know why. Andreu explained that fire suppression, logging, and other management practices over the last century have changed the structure of U.S. forests. Many forests are a lot denser than they used to be and are choked with small trees that fuel big blazes, increase the risk of insect outbreaks, and diminish the quality of habitat for many forest species.

Thinning to remove some of those small trees could solve these problems, but that costs money. And with the closure over the last two decades of mills that turn low-quality timber into pulp, plywood, and similar products, those small trees are pretty much worthless. Where thinning is done today, the wood is often land-filled or burned on-site; more often, no thinning is done and the trees are just left standing.

So Andreu and Duss started brainstorming ways to make that small-diameter wood valuable again. A little over two years later, Andreu and a multidisciplinary group of collaborators have now drawn up plans for a system that can quickly and efficiently transform wood chips into pure methanol. Even better, the apparatus will fit on the back of one or two semi trailers for transport to wherever it’s needed.

Each step of the process relies on existing technology, explains Ravi Upadhye, a chemical engineer at Lawrence Livermore National Laboratory in California and systems designer for the project. In fact, the basic techniques were developed before World War II. Although the different steps have not been integrated before, “there’s no fundamental reason why they shouldn’t work together,” he says.

The methanol produced could be used, among other purposes, to power hydrogen fuel cells, a clean, quiet technology combining hydrogen and oxygen atoms to produce energy. Its only byproduct is warm water.

That’s where Duss comes in. He is the CEO of IdaTech, a small company in Bend, Oregon, that has emerged as a leader in the development of fuel cells that run on liquid fuel. Among liquid fuels, methanol is ideal because it is a small, simple molecule (its chemical formula is CH3OH) that easily gives up its hydrogen atoms.

Eventually, sale of methanol produced by the system could help fund ecological restoration projects, enabling restorationists to recoup some or even all of their costs. “The important point is that you can get some economic return from these situations, so that you can restore a larger area of land to a natural condition,” explains Professor Kristiina Vogt of the College of Forest Resources at the University of Washington, who is coordinating the project along with Andreu.

In the Pacific northwest region of the U.S., for example, even-aged stands in tree plantations could be thinned to create the multi-layered canopies favored by the many species that rely on old-growth habitat. In the southeastern U.S., removal of oaks encroaching into longleaf pine forests would help restore open, park-like forest structure.

More broadly, Andreu argues, in the millions of hectares of forests adapted to low-intensity fires where abnormally heavy fuel loads have built up, removal of some of that excess fuel is itself restoration. “These forests have gotten out of whack with their fire regimes, and so you’re restoring that ability for fire to behave in the natural manner,” he says.

Nor are the possibilities limited to the U.S. In Costa Rica, for example, a group of ecologists associated with the Tropical Science Center has expressed interest in using the system to help restore a second-growth tropical forest currently dominated by weedy, exotic tree species to a more natural structure and species composition.

Andreu and Vogt hope to have a prototype of their system built by early 2006. The first demonstration projects may take place in several rural towns and Indian reservations in Washington and Oregon. Leaders in these communities, which are poorly served by the existing electricity grid, are excited about the possibility of a decentralized energy source; some hope to use hydrogen fuel cells to power local schools. The former logging communities also hope that an infusion of timber-industry jobs will give a boost to their depressed economies.

That’s a pretty remarkable alchemy: a system that was dreamed up over Thanksgiving dinner could connect ecological restoration to a twenty-first- century hydrogen economy.

About the Author:
Sarah DeWeerdt is a freelance writer based in Seattle, Washington.