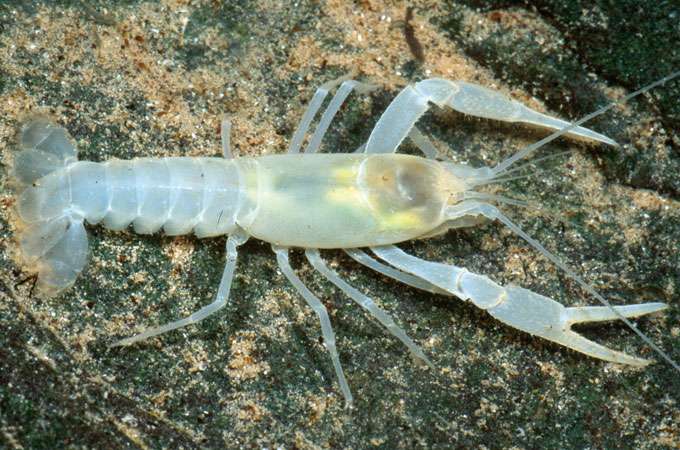 People are using so much groundwater that there are chronic shortages in many parts of the world. Whereas the proposed solutions focus on providing drinking and irrigation water, groundwater is also critical to the diverse creatures that live beneath the surface of the Earth. A new analysis calls for protecting groundwater ecosystems as well as the groundwater supply.

“Most of the acts passed to protect and restore groundwater sources acknowledged the value of groundwater but failed to emphasize the importance of healthy subsurface ecosystems,” say Dan Danielopol of the University of Tübingen in Germany and three coauthors in the June 2003 issue of Environmental Conservation.

Nearly a third of the world’s fresh water is underground — only about one percent is in surface waters and the rest is largely in glaciers — and groundwater ecosystems are home to a wide variety of species. Underground life ranges from bacteria to crustaceans to fish and includes many unique creatures that have adapted to their permanently dark habitat. Subterranean animals are typically colorless and lack eyes but have well developed antennae or other sensory organs.

Whereas groundwater was once thought to be inexhaustible, people are now using so much that water tables are falling on every continent. The water table has dropped more than 24 meters in 40 years in Bangkok, and nearly 30 meters in 15 years in Tamil Nadu, India. Groundwater overuse is compounded by the fact that groundwater recharging has been reduced by changes in land use. For instance, altering the course of a river can separate the riverbed from the aquifer. Besides being depleted, groundwater is becoming increasingly polluted by fertilizers, pesticides, sewage, fuel from leaking storage tanks, and other contaminants.

Unless something is done, the water problem will only get worse. The latest projections are that the world’s human population will grow by about a third by 2025 (from about six to eight billion). “A water crisis seems inevitable in the 21st century,” say Danielopol and his colleagues.

Ways to increase the supply and purity of groundwater include using water-saving technologies such as root-zone irrigation, returning to the traditional values of treating water as precious in arid areas, and reducing subsidies for fertilizers and pesticides.

Although these measures would benefit both people and groundwater ecosystems, the researchers caution that they will not be enough to protect subterranean ecosystems. “Groundwater ecosystems should be included in the plans for the establishment of protect-ed areas and nature reserves,” say Danielopol and his colleagues. This is particularly true for areas with exceptional cave animal diversity, such as eastern North America and Slovenia, as well as for alluvial plains and their underlying aquifers.