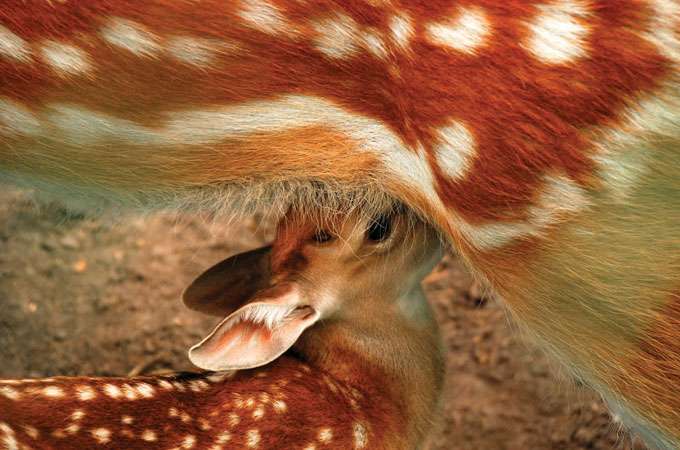 For millennia, deer have protected their newborns by stashing them deep in the brush, where they stay until they’re strong enough to run away from predators. That’s good news if you’re a fawn struggling to survive. But what if you’re Chad Bishop, a researcher with the Colorado Division of Wildlife whose work depends on finding baby deer when they’re hidden and immobile?

To understand why certain deer populations are on the decline, Bishop gathers data by attaching radio collars to the animals shortly after they’re born. In the past, this meant stalking a pregnant doe for days, waiting to see where she hid her fawn. Now, Bishop is among a growing number of researchers using a new tool that could help study everything from moose to zebras: small transmitters that pop out of an animal’s birth canal to signal the location of its young.

To use the device, researchers must first capture female deer right after mating season, then give them an ultrasound to see whether they’re pregnant. Expectant does are implanted with the transmitter, a wishbone-shaped instrument inserted into the vagina. What makes the transmitter unique is its specially designed silicon wings, which retract as the transmitter is inserted and then fold out to hold it in place. When the animal goes into labor, the fetus travels down the birth canal and dislodges the device. Once expelled, the instrument detects the difference between the warm deer and the cold ground and broadcasts a pulse that tells researchers where to find the fawn.

The transmitter was developed by Jake Bowman, a wildlife ecologist at the University of Delaware, and Harry Jacobson of Mississippi State University. And, although it’s still being perfected, the invention is already helping researchers like Bishop unravel mysteries about why some species are struggling. In one of the largest studies yet conducted using the transmitters, Bishop found and tagged nearly 300 newborn mule deer on the Uncompahgre Plateau in southern Colorado. His goal: determine why their local population had fallen by half over the past 20 years.

Bishop knew that human development and declining habitat were diminishing the animals’ food supply. But no one understood exactly why a large number of fawns were dying at an unusually young age. Bishop thought the animals might simply be starving. Others thought the fawns, weakened by lack of food, were falling prey to predators and disease.

By monitoring newborn deer, Bishop proved himself right. The young animals weren’t putting on the weight they needed to make it through the winter, a discovery that could help state wildlife managers restore the deer population. Without the transmitters, “there was just no way we could have captured enough fawns to make this study possible,” Bishop says.

The transmitters could eventually be used on a wide variety of animals, but Bishop says they have flaws that must first be addressed. Most notably, the wings sometimes don’t keep the devices in place throughout an entire pregnancy. In a recent study in the Journal of Wildlife Management, Bishop detailed how one-third of the implanted transmitters fell out before the mule deer gave birth.

The company that manufactures the device, Advanced Telemetry Systems of Isanti, Minnesota, is working to address these flaws, and Bishop believes the problems aren’t major enough to hinder the device’s overall promise. “In all, these transmitters are an exciting field technique that can improve the ability to understand some complex interactions,” he said.

Left: The device’s wings hold it inside a doe’s birth canal until she goes into labor. Then the transmitter is expelled and broadcasts a signal that pinpoints the fawn’s location. Photo courtesy of Colorado Division of