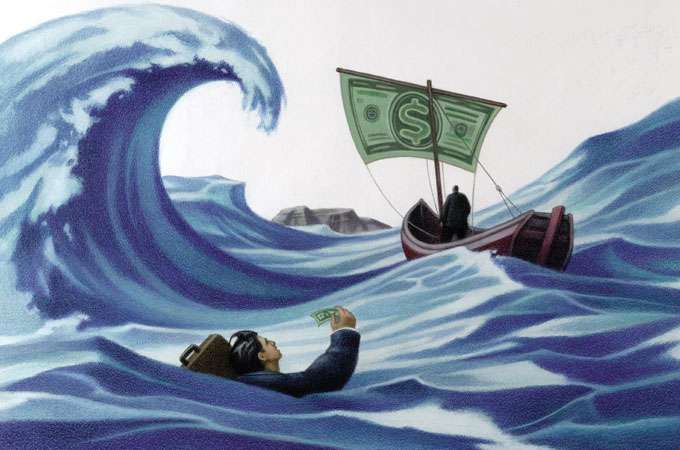 One hundred miles from their rock-bound Nova Scotia homeport, Franklyn d’Entremont and his crew gaze with satisfaction upon their biggest fish of the day—a 147-kilogram (325-pound) swordfish (Xiphias gladius) just hoisted aboard. It’s been an unusually productive day for these harpoon fishermen; five sword-bearing giants lie on deck. Nowadays, one or two fish is the norm. But d’Entremont’s satisfaction ebbs as he describes past times when two dozen fish was a common day’s catch and, on the best days, decks were crowded with upwards of 40 swordfish.

A recent study in the journal Nature (1) estimated that large predatory fish have declined by 90 percent worldwide since the 1950s, and other studies have documented similar trends (2, 3, 4). In the Atlantic, these declines occurred in large part because the international fishery commission responsible for management was in the thrall of industry interests, and its managers were insulated from conservation concerns. Although the public was increasingly aware of problems with fisheries and was expressing their concerns, conservation groups lacked a vehicle for harnessing such concerns or giving the public a way to participate in helping fisheries improve.

That all changed in 1998. Seaweb and the Natural Resources Defense Council (both nonprofit conservation groups) recruited top east coast chefs like Rick Moonen, now of RM Restaurant (New York), and Nora Pouillon, from Restaurant Nora (Washington, DC) to help launch a campaign called “Give Swordfish a Break.” Over 700 chefs boycotted swordfish until the commission cut catch quotas. Concurrently, we published the first general consumer guide showing which seafoods are ocean-friendly and which aren’t (5). And it worked. Swordfish became unfashionable, the wholesale price fell, and longline fishermen got worried enough to allow the fishery commission to reduce catch quotas. Simultaneously, a lawsuit brought by us and a coalition of other conservation groups forced the U.S. to close important juvenile nursery grounds. The boycott was called off in 2000, and with regulations in place, the number of juvenile swordfish noticeably increased. Swordfish are still struggling, and whether those juveniles will be allowed to grow remains to be seen. But the lessons here lead to an important conclusion—consumers have the power to affect fishery decisions.

People who want to vote at the cash register require accessible information. Before you buy a car, you might get a copy of Consumer Reports to see how different models are ranked according to reliability, satisfaction, and depreciation. Yet for seafood consumers, navigating options on a menu or at a seafood market can be tricky. Many fish are misnamed to enhance their palatability (e.g., spiny dogfish [Squalus acanthias] has reportedly been sold as “cape shark” or even “rock salmon”). And even for those with accurate names, information is often lacking on origin, capture method, population status, or whether endangered species were caught in the same gear.

In response, we developed a method that translates information about fisheries and aquaculture into ranked lists of seafoods. Since publishing our first seafood guide (5), we’ve produced wallet-sized guides and more detailed evaluations in our book Seafood Lover’s Almanac (6) and on our website blueocean.org. Consumers have shown surprising interest and willingness to act. Consumers who understand, for example, that Chilean seabass is a market pseudonym for Patagonian toothfish (Dissostichus eleginoides) and that rampant illegal fishing is depleting toothfish and killing endangered albatrosses, are more likely to make another choice.

Our ranking process is standardized, transparent, and updateable. We evaluate wild species and farmed seafood to account for the different conservation concerns associated with wild-capture fisheries and aquaculture. Our analysis is based on five criteria: for wild species, life history characteristics, current level of abundance, habitat quality, management effectiveness, and bycatch. Farming systems are evaluated for their on-site operations (e.g., open net pens versus closed re-circulating tank systems), feed composition, water quality, biological effects (e.g., species is native versus nonnative), and ecological effects (e.g., sensitivity of surrounding habitat). By answering a suite of questions within these categories, we create a comprehensive profile for each species, probing and citing published government reports, scientific journal articles, and industry and trade reports. We use information in the profile to score each species and then for clarity, convert the score into a color-coded seafood recommendation.

Typically, species having biological characteristics allowing greater resilience to fishing pressure, that are relatively abundant, and that are caught with fishing/farming methods causing little damage to habitat and other wildlife score highest and earn a “green” rating. Species with more problems and lower scores earn, in descending order, a green/yellow, yellow, yellow/red, or red ranking. A “red” species is subject to problems such as overfishing, high bycatch, and poor management; or farming methods have serious environmental impacts such as water pollution and heavy use of wild fish for feed.

In recent years, our seafood guides have become more expansive. In addition to listing the most popular seafoods (as determined by industry trade reports and surveys from restaurants and grocery stores), we also include less well known but exceptional alternatives. For example our New York eafood guide, produced in partnership with the Wildlife Conservation Society, featured “green” species such as U.S.-caught Spanish mackerel (Scomberomorus maculates) and farmed Arctic char (Salvelinus alpinus). And to underscore the differential effects of fishing methods on marine communities, we separately evaluate fisheries targeting the same species with different gear types. For instance, pole- and troll-caught tuna rate green/yellow, whereas longline-caught tuna rate yellow/red.

Our success hinges on transparency. Transparency generates trust with the public, the scientific community, the fishing industry, and resource managers. Because we can share research and scoring documentation over the Internet, we can respond immediately to inquiries about our rankings. For example, when a biologist expressed skepticism about our American lobster (Homarus americanus) evaluation, we quickly emailed the profile and score sheet and within hours were able to engage in a dialogue about the status of the lobster population and the fishery. Less transparent systems risk creating perceptions of gross subjectivity, lack of thoroughness, or secrecy.

From ranked lists to consumer boycotts to teaming up with celebrity chefs, conservation groups have tried many different approaches to link seafood consumption to conservation. Seaweb’s Seafood Choices Alliance now coordinates and publicizes some of these efforts, functioning as a conservation-oriented seafood trade association. When Seaweb convened the first annual Seafood Summit in the year 2000, the participants fit around one conference table. Now, the Alliance includes close to 2,000 seafood professionals (chefs, retailers, wholesalers, and fishermen) and over 30 nongovernmental organizations all working from different angles to redefine how the U.S.—and eventually other countries—think about seafood.

The Marine Stewardship Council (MSC), a nonprofit organization first established as a green-business partnership between the World Wildlife Fund and Unilever, has an eco-labeling program for seafood that is also gaining visibility. Working with independent certifying agencies, the MSC considers fisheries that volunteer for evaluation and certifies and labels those that satisfy their principles and criteria. To date, seven fisheries have been MSC-certified. A difference between certifications and ranking systems is that consumers see the results of certifications as an on-pack label for only those products that have passed evaluation, whereas ranking systems arm consumers with the information they need to choose among an array of products in the marketplace. We see these two approaches as different and complementary.

For a movement that is five years old, the successes are substantial: a niche market for sustainable seafood has emerged, millions of seafood guides are in circulation, and the topic has been covered in publications ranging from Saveur to The New York Times.

The seafood guides have already created incentives for some fisheries to improve practices. For example, when Alaska adopted regulations in 1997-1998 mandating that longliners use albatross-deterrent techniques, Alaska halibut rose high enough in our evaluation process for us to rank it in the green. British Columbia halibut fishers complained to us, and we explained that Alaska was addressing the bird-kill problem that was still dragging down the score for the B.C. halibut. This prompted B.C. fishers to close the competitive gap by asking their government for regulations similar to Alaska’s. Consequently, Pacific halibut (Hippoglossus stenolepis)—from either Alaska or British Columbia—now scores highly enough in our system to earn a green rating. Thus, our guide created a market incentive that moved the fishing industry to reduce albatross mortality. Further evidence of newly felt market incentives is that fisheries once critical of certification schemes now see market advantages and are increasingly applying for MSC evaluation.

The biggest challenge now is to get more seafood suppliers on board. Although demand is growing, few distributors specialize in eco-friendly seafood. EcoFish, Inc. is one of only a few exceptions; they buy species like troll-caught albacore tuna, Pacific halibut, and Alaskan wild salmon—all ranked high on our list—directly from fishers and ship to restaurants, caterers, and grocery stores. Organic food specialty chains recently have shown interest in creating ecologically conscious seafood inventories, and if this takes hold, it might help shift some large distributors, wholesalers, and retailers.

Everybody eats. People’s most direct effect on the ocean is the fish they consume. Demonstrating that not all seafood is equal has proven an excellent way to start a discussion with audiences who do not identify themselves as conservationists. By giving people options they can act on, we’ve helped build a wider constituency for ocean conservation.

We wish to thank Rebecca Goldberg and staff from Environmental Defense for helping to develop our criteria for evaluating farmed species. We also thank Environmental Defense and the Monterey Bay Aquarium for sharing research on some species included in our seafood guides. And thanks to Suzanne Ludicello for her early contributions to our methodology.