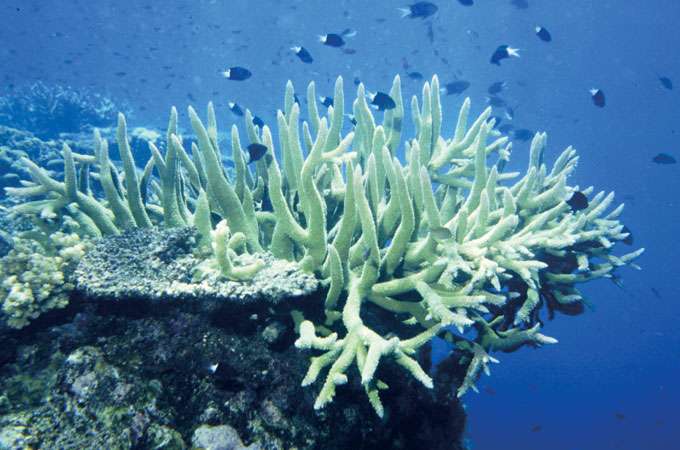 Although the high ocean surface temperatures during the 1997-1998 El Niño bleached coral reefs in more than 50 tropical countries worldwide, patches of coral did survive in or near the damaged reefs. A new study of these patches identifies factors likely to protect these threatened marine ecosystems during climate change.

“As baseline sea surface temperatures continue to rise, climate change may represent the single greatest threat to coral reefs worldwide,” say Jordan West of the U.S. Environmental Protection Agency, and Rodney Salm of The Nature Conservancy in Honolulu, Hawaii, in the August 2003 issue of Conservation Biology.

Coral reefs have among the greatest biodiversity of any ecosystem worldwide and provide key services to people, from food to coastal protection to tourism. Reef-building corals depend on symbiotic algae to photosynthesize much of their food, and surface waters that are warmer than normal can “bleach” corals by depleting their photosynthetic pigments or even make them expel their algae.

The researchers found that the factors that confer resistance to bleaching include local upwellings of cold water and natural exposure to heat stress. For instance, in an area of Binh Thuan, Vietnam, upwelling of cold water brought surface temperatures down from 39 degrees C to 29 degrees C within days, and corals there recovered better than elsewhere in the country.

In addition, corals that emerge at low tide may be more tolerant of heat stress. For instance, in Palau’s Rock Islands, the reef flats that emerge during low tides were bleached less than the parts of the reef that are in deeper waters.

The factors that confer resilience to bleaching include having diverse populations of corals that produce lots of larvae, surface currents that spread the larvae, herbivorous fish that graze the algae that otherwise grow on top of damaged reefs and prevent the establishment of new corals, and management that decreases stresses such as pollution and fishing methods that destroy reefs.

West and Salm recommend that reef managers use this work to identify and protect patches of coral reef that are most likely to persist during continuing climate change. Establishing reserves that protect networks of these patches will help ensure that the corals that survive a major bleaching event will be able to replenish those that do not. The Nature Conservancy is currently using this research to help coral reefs recover from bleaching in the Republic of Palau, which is developing a national network of marine protected areas.