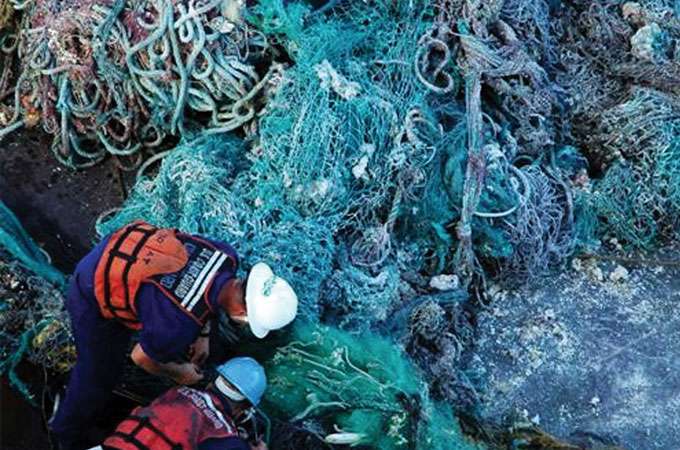 When physicist Jim Churnside boarded a National Oceanic and Atmospheric Administration (NOAA) “hurricane hunter” airplane loaded with thousands of dollars’ worth of instruments, he wasn’t sure whether he could find the ghosts he was looking for.

What if his team were wrong about the idea of using satellite data to find ghost nets—abandoned fishing gear—in the Pacific? Locating even a thick concentration of nets in the world’s largest ocean, which covers more area than the seven continents combined, was a formidable goal. Other than visual sightings from ships, there were no proven ways to find ghost nets on the open ocean. Only a flight to verify the satellite predictions would tell for certain whether the new approach would work.

So on a sunny morning in late March 2005, a crew of 13 flew north from Honolulu to the subtropical convergence zone, a meeting of ocean currents invisible to the eye but detectable with satellite information. It was here, the team believed, that currents would concentrate derelict gear.

Two hours out of Honolulu, with the NOAA plane streaking just 300 meters above the Pacific, the intercom crackled to life. At first there were just a few sightings. “Single white float on starboard,” “three red floats, one white buoy on port,” remembers Tim Veenstra. As president of Alaska-based Airborne Technologies, Inc., Veenstra helps direct NOAA’s ghost net project. Then the sightings came thick and fast.

“For me, the ‘aha!’ moment came when the reports became a continuous stream,” Churnside says. At the end of three flights, the group had counted more than 2,000 pieces of fishing debris—everything from individual floats to great balls of netting more than 10 meters across. This gear can drift for years because it is made of nylon and plastics. All the while, the nets do their lethal work, killing fish and marine mammals and harming coral reefs.

Abandoned nets in the North Pacific are particularly destructive when currents sweep them past the Hawaiian Islands. “The Hawaiian archipelago is like a giant comb,” Churnside says. Huge clumps of drift nets kill endangered Hawaiian monk seals (Monachus schauinslandi) in their birthing and nursing grounds. Biologists think there are about 1,400 endangered seals remaining, but in one year alone, 25 were found dead, tangled in abandoned nets. The nets also snag and buffet coral reefs surrounding the islands.

One multi-agency effort in 2001 used 3 ships and 18 divers to remove about 64 metric tons of nets and debris from two atolls—an enormous effort, but a tiny one within the context of the entire 1,900-km-long coastline of the Hawaiian archipelago. Plucking nets from the sea before they tangle in reefs is a far more efficient way to handle the problem—as long as the nets themselves can be found.

The first step is finding the convergence zones, which are constantly on the move. The next is figuring out which kinds of satellite data to use. Veenstra, Churnside, William G. Pichel, and colleagues had to pick through the different options to find the one with the most precision.

Altimeter measurements of ocean heights identify eddies, which suggest a meeting of currents. Surface temperatures also tell researchers where water masses from different parts of the Pacific converge. Synthetic-aperture radar produces near-topographic representations of the ocean’s surface roughness. When water masses meet, currents may make the water either rougher or smoother than the surrounding waters. In the end, it was simply color—a ratio of blue to green that indicates chlorophyll a levels in the water—that proved most accurate for identifying the subtropical convergence zone.

Churnside and Veenstra couldn’t know this, however, until they actually checked the satellite predictions against what was out there in the Pacific in the spring of 2005. When the moment came that confirmed the group’s premise, “it was a mixed feeling,” Churnside said. On the one hand, finding the debris justified their approach. “On the other hand,” he adds, “it would have been nice not to have so much stuff out there.”

Veenstra’s company has built buoys that can be dropped among concentrations of nets so they can more easily be located by passing ships. Four of the solar-powered buoys were dropped into debris zones in August 2005; the buoys currently broadcast their locations to a satellite twice a day, enabling scientists to keep tabs on the trash so that eventually it can be removed from the sea.

“We’ve proven we can locate and track areas of ocean debris,” Veenstra said. Now, “we’re trying to secure funding for a cost-effective cleanup.”