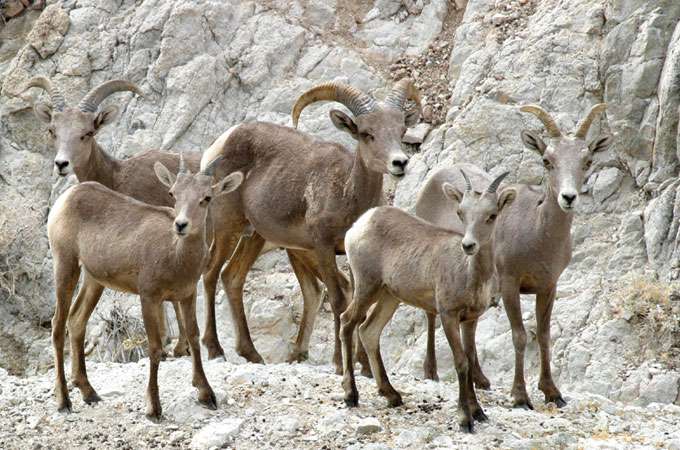 Highways Are a Genetic Barrier for Bighorns

New research shows that highways have reduced the genetic diversity of desert bighorn (Ovis canadensis nelsoni) sheep in southern California. The effects of barriers on these at-risk bighorns are particularly dire because the populations live in scattered mountain ranges and so are already naturally isolated.

“Anecdotal evidence suggests that bighorn sheep rarely cross [roads],” say the researchers. Yet desert bighorn populations are naturally small and local extinctions are common, so they depend on migration for gene flow and recolonization. This leaves them especially vulnerable to isolation by highways with their multiple lanes of whizzing traffic, concrete median dividers, and fences. California has an estimated 3,400 desert bighorns living in about 50 populations.

The researchers found that genetic diversity was lower than expected based on natural geographic isolation alone. Desert bighorn populations that were completely isolated by highways fared the worst: they were estimated to have lost as much as 15 percent of their genetic diversity in only about 40 years.

“This study shows that the scale at which wildlife conservation must be applied is much greater than that of the day-to-day habitat used by desert bighorns,” says Marco Festa-Bianchet of the Université de Sherbrooke in Québec, Canada.

A relatively simple fix would be to reroute the fences along highways so bighorns can reach the other side via underground drainage tunnels. Other approaches include underpasses and overpasses, which have helped large animals from elk to bears cross highways in Canada’s Banff National Park.