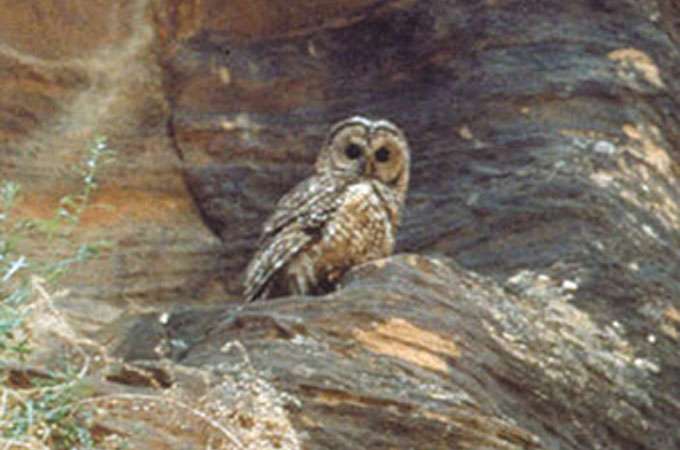 Imagine if people kept hiking through your baby’s room. That’s essentially what happens in some of the canyons where Mexican spotted owls (Strix occidentalis lucida) breed, and a new study shows that hikers can disrupt the owls’ behavior in ways that might harm their young.

“We suggest that restrictions on hiking intensity should be considered for canyons with high levels of human activity,” say Elliott Swarthout, who did this work while at the University of Arizona in Tucson and who is now at the Cornell Laboratory of Ornithology in Ithaca, New York, and Robert Steidl of the University of Arizona in Tucson in the February issue of Conservation Biology.

The threatened Mexican spotted owl lives in coniferous forests in the Southwest and Mexico. In Utah, the birds nest, roost, and hunt almost entirely in steep, narrow canyons. Hiking and other recreational activities along the canyon bottoms are highest from March through October, which overlaps with the owls’ breeding season.

To see if hiking affects the owls, Swarthout and Steidl studied ten nests during the breeding season in Utah’s Canyonlands and Capitol Reef national parks, which had more than 400,000 and 650,000 visitors per year, respectively, during the 2-year study period. The nests were 11 to 68 meters above the canyon bottoms, and the researchers observed the owls during a series of experimental “hiking treatments.” A hiker passed under a given nest every 15 minutes for 4 hours during three time periods (early morning, mid-day, and evening).

Swarthout and Steidl found that hiking primarily affected the female owls: notably, females spent nearly 60 percent less time on prey-handling activities such as feeding their young and a third less time on daytime maintenance activities such as tending the nest and preening themselves and their young. Preening is important to the birds’ health in part because it reduces parasites.

Because female Mexican spotted owls provide virtually all of the parental care, these behavioral changes could harm their young. Less than a third of the young survive anyway, and getting less food and other kinds of care could make them even more vulnerable.

The experimental hiking level in this study is higher than the actual hiking levels occurring in most of southern Utah’s canyons. However, several of the canyons where the owls live have more than 50 visitors per day, which is close to the experimental hiking level. In such areas, the researchers recommend protecting owl habitat during the late March—early June nesting season by limiting hiking or establishing buffers around nest sites. The researchers had previously found that 95 percent of owls were not flushed when hikers stayed about 24 meters away; however, many canyons are so narrow that buffers of this size would preclude hiking in them.

Swarthout and Steidl’s work is being used to help establish recreational guidelines around Mexican spotted owl territories on federal lands in Arizona, New Mexico, and Utah.