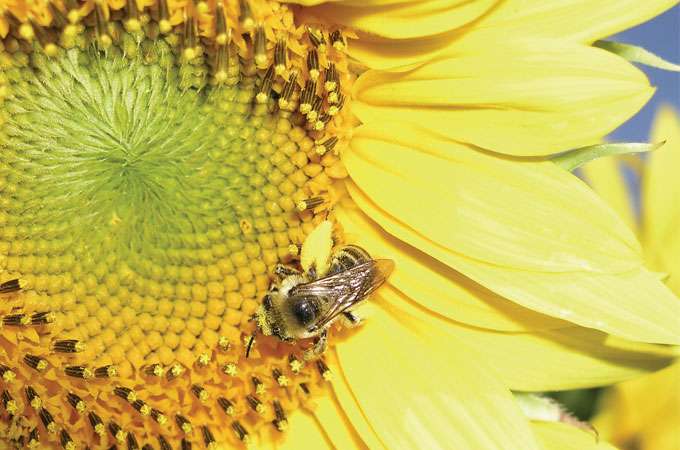 Honey Bees Get a Bump from Wild Brethren

Wild bees have a surprising way of boosting crop production: according to new research, they literally bump it up by crashing into honey bees, which then visit and pollinate more flowers. In honey bee-stocked sunflower fields, seed production is five times higher when wild bees are plentiful than when they are rare.

“Wild bees may contribute more pollination services through enhancement than through direct pollination,” say Sarah Greenleaf and Claire Kremen, who did this work while at Princeton University in New Jersey and are now at the University of California, Davis and Berkeley, respectively.

This work was prompted by other researchers’ observations that honey bees (Apis mellifera) had more pollen on them in sunflower (Helianthus annuus) fields with a greater number of wild bees than in fields with fewer wild bees. To see whether wild bees increase honey bee pollination, Greenleaf and Kremen measured wild bee abundance and diversity as well as seed production per honey bee visit in 16 hybrid sunflower seed farms in northern California. This crop depends on pollinators because some plants have only pollen-bearing male flowers, whereas others have only nectar-producing female flowers. There were 33 species of wild bees; their abundance, which was measured per meter of sunflower row per minute, ranged from one to ten bees.

“This allows us to go to farmers with evidence of the importance of wild bees,” says Mace Vaughan, conservation director of the Xerces Society for Invertebrate Conservation in Portland, Oregon. These findings have already begun prompting some farmers to put in more native plants, which provide wild bees with habitat and food when the crops aren’t flowering. Farmers can fit native plants into hedgerows between fields or areas that are marginal for crops.