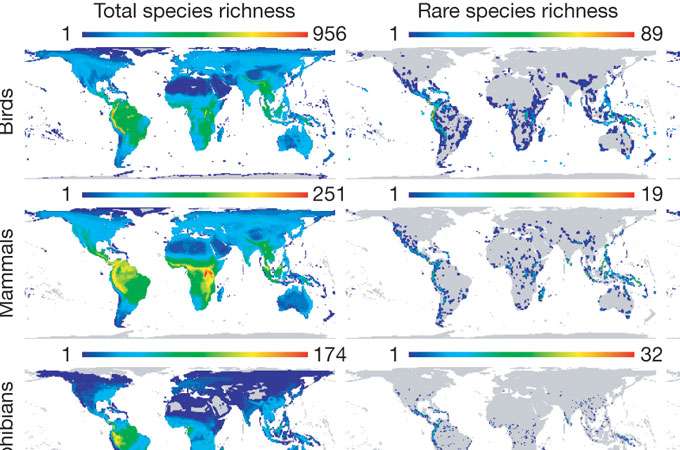 While many conservation strategies are based on the assumption that hotspots for one group of imperiled species will also be rich for other groups, new research reveals that this is not true. The most accurate map to date of vertebrate diversity worldwide shows that there is little overlap among rare and threatened amphibians, birds, and mammals.

“‘Silver bullet’ conservation strategies alone will not deliver efficient conservation strategies,” say Richard Grenyer, David Orme, and 14 coauthors in Nature. Grenyer did this work while at the University of Virginia, Charlottesville, and is now at the Royal Botanic Gardens, Kew, in the United Kingdom; Orme is at Imperial College, London. “Locations rich in one aspect of diversity will not necessarily be rich in others.”

Previous work had suggested that there was considerable overlap among rare species from group to group. However, this inference was drawn primarily from maps dividing the earth into large areas, such as ecoregions averaging 55,000 square kilometers. In contrast, Grenyer, Orme, and their colleagues constructed far more precise maps with divisions of about 9,300 square kilometers. In all, they mapped the distributions of more than 19,000 terrestrial vertebrate species (about 5,600 amphibians, 9,600 birds, and 4,100 mammals) according to three classifications: total, rare, and threatened.

The neotropical mainland is the one place rich in rare species across the three groups. But beyond this region they diverge, with concentrations of rare amphibians on continents, of rare birds in islands in oceanic archipelagos, and of rare mammals on islands near continents. Similarly, while all three groups are threatened primarily by habitat loss, each faces various further threats. For example, amphibians are threatened by climate change and infectious disease in tropical mountains; birds by invasive species, such as the rats and cats introduced to New Zealand; and mammals by overexploitation, such as the bushmeat trade in east Africa.

The researchers believe that there could still be places with many rare, endangered, or threatened species across these animal groups. However, “we can expect these regions to be more spread out and bigger in total area,” says Grenyer. “With high-resolution distribution data, we can get beyond the useful but rather simplistic idea of absolute hotspots.”