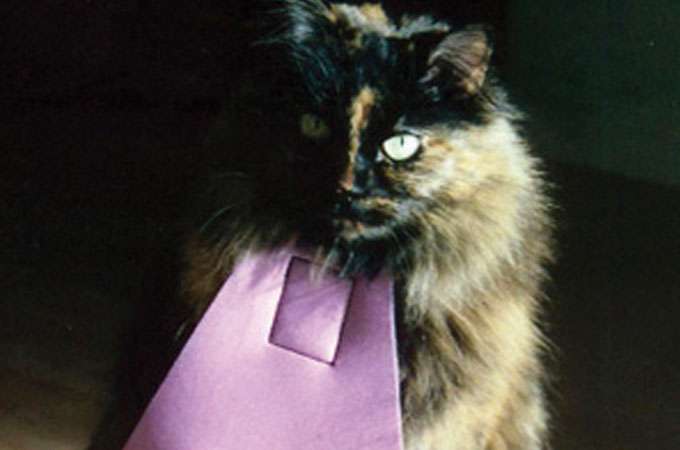 Domestic cats kill an estimated 100 million native Australian animals each year. Now a study shows that a brightly-colored bib attached to a cat’s collar can reduce hunting effectiveness by 72 percent.

Cats are believed to have pushed some Australian species extinct on islands and contributed to the disappearance of ground-living birds and marsupials on the mainland, too. Domestic cats alone have been estimated to catch an average of 32 animals a year and to feed on 347 different birds, mammals, and reptiles. Because of this, pet cats have a poor image in Australia and ownership is in decline, said ecologist Mike Calver at Murdoch University in Perth, Western Australia.

In 2005 Calver was searching the Internet for discussion groups on responsible cat ownership when he chanced across a site advertising the brightly-colored CatBib®, whose inventors claimed significantly reduced predation. Intrigued to discover what impact the product could have on declining native wildlife, Calver asked the manufacturer for some bibs and set up a trial with Perth cat owners. His study is published in the July issue of the journal Biological Conservation. (1)

Over six weeks his team monitored the behavior of 56 cats. Those chosen were known to kill an average of one or more animals every three weeks, and most lived near native bushland. During the trial, each cat spent three weeks with a bib and three without. Dead prey bought home by cats was collected and identified, and instances where prey was rescued and released were recorded.

“It’s a very, very good solution for cat owners who are concerned about the hunting behavior of their cats,” said Calver. “Alone or in combination with a bell, these deterrent devices may lead to reductions of [an average of] 50 percent in the numbers of prey taken by pet cats and may stop some from hunting altogether,” he said.

Made from tough, lightweight neoprene, the bibs are attached to collars with velcro. According to Calver, they are safe for cats when fitted to a safety collar and used outside; the majority of cats grew completely accustomed to wearing the bibs within a few days.

According to Cat Goods Inc., the U.S. manufacturer of the bibs, they work by interfering with a cat’s hunting skills and act as a barrier between predator and prey. But Calver and his team also studied videos of the cats while they were wearing the bibs and found that they were able to climb, jump, and pounce as usual. “Their movement was uninhibited,” he said. “The bib simply helps to alert wildlife to an approach-ing predator and works as a visual warning.”

1. Calver, M. 2007. Reducing the rate of predation on wildlife by pet cats: The efficacy and practicability of collar-mounted pounce protectors. Biological Conservation 137(3): 341-348

Reprinted with permission from www.cosmosmagazine.com (18 Apr 2007)