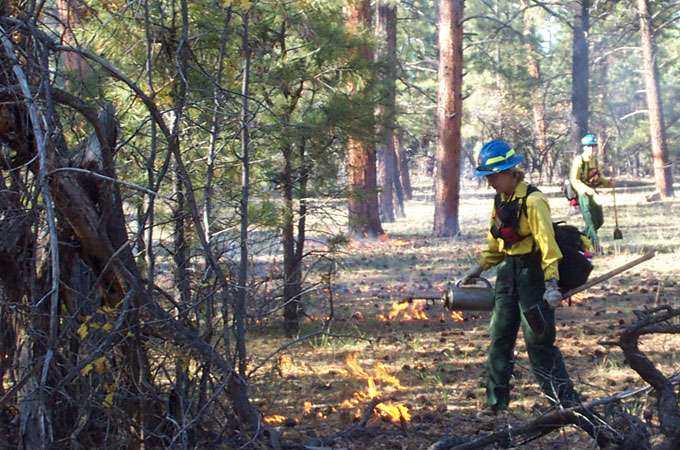 More than a century of fire suppression has turned many western U.S. forests into tinderboxes crammed with flammable young trees and woody debris. Although the problem is obvious, the solution is not. New research suggests that some of these forests could be restored with intense prescribed fire.

“Especially in remote and roadless areas, intense prescribed burning could help restore forests that historically had frequent surface fires,” says Peter Fulé of Northern Arizona University in Flagstaff, who presents these findings together with Allison Cocke and Wallace Covington, also of Northern Arizona University, and Thomas Heinlein of Western Arctic National Park-lands in Kotzebue, Alaska, in the June issue of Restoration Ecology.

The current approach to restoring these forests is thinning followed by surface fire, which is appropriate in areas with roads and houses but has major drawbacks in wilderness areas. Mechanical thinning is costly and time-consuming, and it entails the use of heavy equipment; this requires roads, compacts soil, and can introduce exotic plants. Simulations suggest that intense fire could be used to restore these forests instead. However, some fear that setting intense fires in today’s tinderbox forests could lead to crown-fires, which can kill most or even all of the large old trees.

To determine whether intense fire could restore these forests, Fulé and his colleagues compared the forest structure at adjacent burned and unburned sites in Grand Canyon National Park. The fire was a 1993 prescribed burn that was more intense than intended, due to unexpectedly high winds. The measures of forest structure included tree density, canopy cover, and forest-floor debris.

The results suggest that intense fire could help restore western forests that historically burned frequently. Compared to the unburned site, the burned site was much more like the historical forest, which had fewer trees, a relatively open canopy, and less flammable material on the forest floor. Although the burned site was not a perfect match to the historical forest, overall the outcome appeared consistent with the Grand Canyon’s fire-management goals,” says Fulé.

Fulé and his colleagues acknowledge that intense prescribed burning will be a hard sell for managers, in part because these fires are more likely to escape. However, there are ways to make intense prescribed fires less risky. “Tree thinning could be used along roads and boundaries in the park to create defensible fire buffers, permitting fires in the interior to burn with greater intensity,” they say.