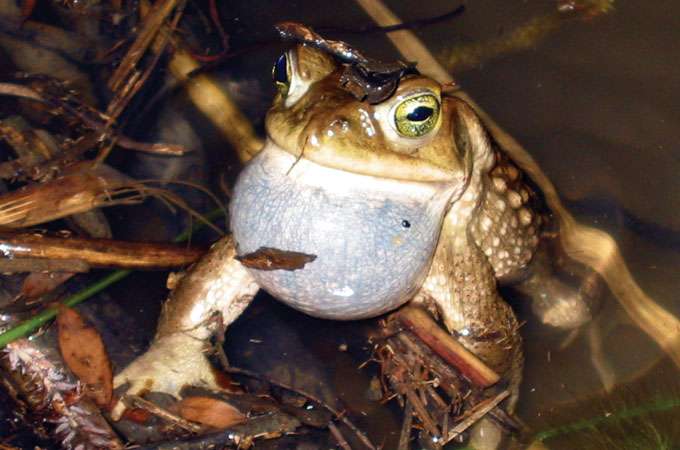 New research shows that cane toads have become less toxic since invading Australia. Besides being good news for the many native species that die after eating the poisonous toads, this diminishing toxicity could be part of a wider phenomenon that applies to other invasive species.

“Changes that affect invaders’ impact could be happening regularly—they haven’t been looked for,” says Ben Phillips of the University of Sydney in Australia, who with Richard Shine reports this work in Animal Conservation.

Native to South America, the cane toad (Bufo marinus) was infamously introduced to Australia in a misguided attempt to control sugar cane beetles in 1935 and has now invaded more than 1 million square kilometers there. The toads are so poisonous that they can kill snakes and other native predators instantly. Most of the toxin is contained in the parotid glands above the shoulders, and larger toads are generally more toxic.

The researchers measured the body lengths and parotid glands of 140 cane toad specimens in the Queensland Museum that had been collected at known sites between 1935 and 2001. Using a map of the toad’s invasion since its initial introduction, the researchers determined how long the species had been at each collection site at the time the various specimens were taken.

The results showed that both the bodies and the poison-rich parotid glands of the cane toad are shrinking. The longer the interval since the species had invaded a collection site, the smaller the toads and their parotids. “This translates directly to a reduced impact on predators,” say the researchers. “This result strongly suggests that toads will exert their maximal impact on native predators when they first arrive in an area; the level of impact will then decline over time.”

The toads and their parotids are shrinking at rates typical of rapid evolution. Because many other invasive species are known to adapt quickly to new environments, their impacts could also change rapidly. Assessing such rapid changes is key to predicting invasives’ long-term impacts on ecosystems, say the researchers.

Phillips, B.L. and Shine, R. 2005. The morphology, and hence impact, of an invasive species (the cane toad, Bufo marinus): changes with time since colonisation. Animal Conservation 8:407-413.