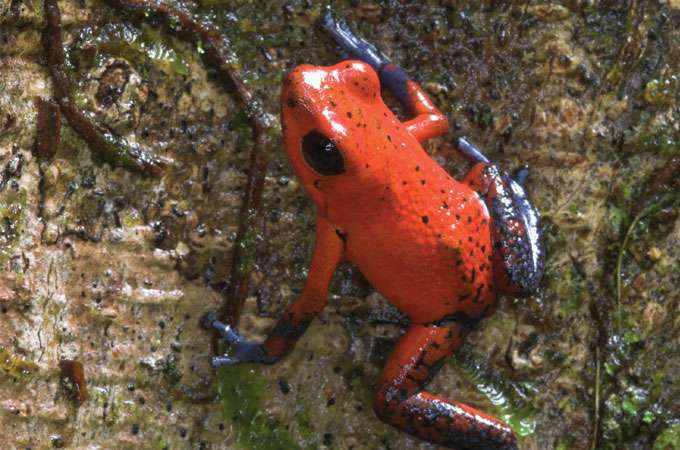 Massive amphibian die-offs in Central America have been hard to explain because they are more common at higher elevations, where habitats seem more pristine. But new research resolves this paradox, revealing that the region’s mountaintop cloud forests are literally dripping with agricultural pesticides.

In hindsight, it’s not surprising. In North America, we know that pesticides are transported to high elevations and that they have been implicated in frog declines in California mountains. And Costa Rica uses more agricultural pesticides than most industrialized countries. But no one had ever connected the dots before.

A research team established the link by measuring agricultural pesticides in the air and soil at varying elevations throughout Costa Rica. Most of the sites were in protected areas where pesticides had never been used. The study, reported in Environmental Science and Technology, demonstrated that air pesticide levels peaked in the lowlands near rice fields and banana plantations but that soil pesticide levels peaked in the mountains. Compared to soil in the lowlands, soil at elevations above 2,500 meters contained about five times more of the fungicide chlorothalonil and 10 times more of the insecticide endosulfan. Both chemicals are highly toxic to aquatic life.

The pesticides’ accumulation in mountain soil results partly from their chemical properties. Like many pesticides in the warmer lowlands, chlorothalonil and endosulfan are found mostly in the gas part of the atmosphere. However, in the cooler highlands, these toxicants move to the water part of the atmosphere. The weather does the rest. As trade winds blow from the Caribbean Sea, they transport pesticides hundreds of kilometers from the lowlands up to the mountains. There, rain and fog wash the pesticides from the air and deliver them to the ground. This scenario was validated with a model accounting for Costa Rica’s weather patterns and the pesticides’ chemistry.

Over the years, many suspects have been named in the decline of Central American amphibians, from UV radiation to fungal infections exacerbated by climate change. “Our study provides an alternative explanation,” say the researchers, who were led by Gillian Daly and Frank Wania of the University of Toronto at Scarborough. “Montane cloud forests downwind of major pesticide application areas appear particularly vulnerable.” Just goes to show how few places are truly untouched by man.