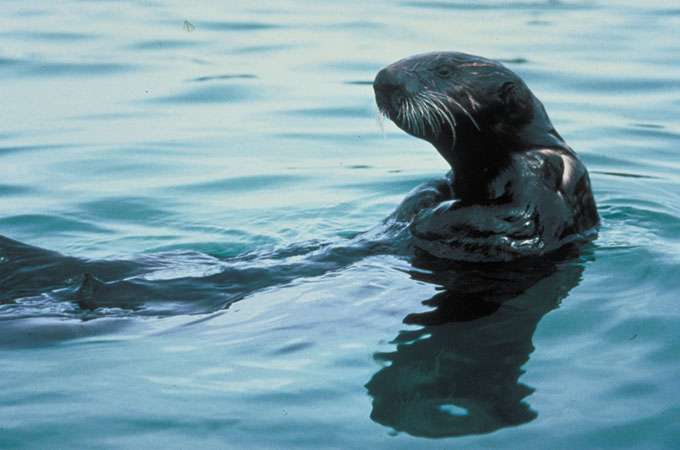 Marine Reserves Can’t Do It All: Sea Otters vs Red Abalone

California’s sea otters (Enhydra lutris) and red abalone (Haliotis rufescens) fisheries both need help — but what’s the best way to protect predators as well as their prey? New research suggests that the answer is separate reserves.

“We conclude that coastal marine protected areas off California cannot enhance abalone fisheries if they also contain sea otters,” say Samantha Fanshawe, who did this work while at the University of California at Santa Cruz and who is now at the U.K.’s Marine Conservation Society; Glenn VanBlaricom of the University of Washington in Seattle; and Alice Shelly of TerraStat Consulting Group in Seattle, Washington, in the February issue of Conservation Biology.

California’s red abalone population is so low that all of the commercial fisheries and all but one of the recreational fisheries are closed. Similarly, California’s sea otter population is at roughly 2,000 and is dropping by about 1-2 percent each year. Although the state has two marine reserves that protect the otters from people, there are none that protect the abalone from otters.

To see if reserves can both protect the sea otters and rebuild the red abalone fisheries, Fanshawe and her colleagues studied red abalone at six sites, four with and two without sea otters. The sites with otters were off Monterey County, and the sites without otters were off Sonoma County; abalone harvesting is prohibited at all six sites. The researchers determined the abundance and size of red abalone at two depth zones, “shallow” (about 3-5 meters) and “deep” (about 8-10 meters). Sea otters can dive as deep as 100 meters and so can easily reach abalone on both zones.

Fanshawe and her colleagues found that red abalone were far more abundant at the sites without sea otters than at those with the otters: there were about seven times more of the abalone in the “deep” zones (15.6 vs 2.2 per study plot), and nearly 20 times more in the “shallow” zones (17.5 vs 0.9 per study plot). In addition, the abalones were much bigger at the sites without sea otters (18.2 cm vs 23.6 cm; the legal limit for harvest is 18 cm).

This work shows that “calls for management of marine protected areas for multiple uses may be ecologically naive, creating unattainable expectations for performance,” say Fanshawe and her colleagues. The researchers call instead for single-use marine reserves that focus either on ecosystem restoration or on fishery development. This approach has been adopted in the Florida Keys National Marine Sanctuary, where managers have split a former multiple-use protected area into smaller areas with goals that are less likely to conflict.