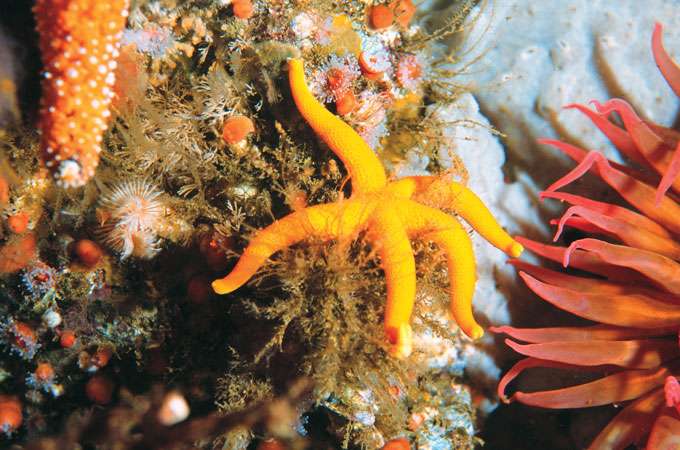 Marine Reserves: Thinking Out of the Box

Current theories for designing reserves are based mostly on land ecosystems. This is not surprising because reserves protect much more of the Earth’s land than of its marine realm (nearly 6 percent versus less than 1 percent, respectively). But key strategies that work for reserves on the land may not work in the sea.

Perhaps the most basic difference between land and marine ecosystems is that the latter are “open.” Waves and currents transport everything from nutrients to the eggs and young of marine species over vast areas. Many marine animals produce tiny larvae that can disperse great distances in plankton (tens to hundreds of kilometers) and join populations far from their parents. In contrast, the young of most land animals disperse an average of less than 10 km. Whereas such “closed” populations could theoretically be self-sustaining, this is not true of the “open” marine populations, which are likely to depend on being replenished by young dispersing from another population.

This means that marine reserves should account for the patterns and variability of the currents that disperse the young. For instance, marine reserves could be designed as networks linked by these dispersal currents, helping to make sure that the various protected populations replenish each other.

Another major difference between land and marine ecosystems is that marine species respond faster to environmental changes, shifting their distributions on the order of decades rather than centuries. This fluidity results from two characteristics of marine systems: the fact that the young can disperse over long distances and that the primary producers in the sea are phytoplankton, which are tiny and short-lived (in contrast, the primary producers on land are trees, which are big and long-lived). To accommodate these relatively rapid shifts in distribution, marine reserves should include a range of depths and latitudes.

Marine reserves should also reflect the differences in human exploitation on land versus in the sea. Whereas most exploited land species are domesticated, most exploited marine species are wild. About half of the fisheries in the U.S. and Europe are classified as overexploited by the Food and Agricultural Organization, and the goals of marine reserves often include replenishing harvested populations outside the reserve. Thus, although protecting nonreserve populations is not a priority for most land reserves, it can be a critical component of marine reserves.

For all the differences between marine and land reserves, Carr and his colleagues stress that there are two important similarities: bigger is better and ongoing management, monitoring, and enforcement are critical.