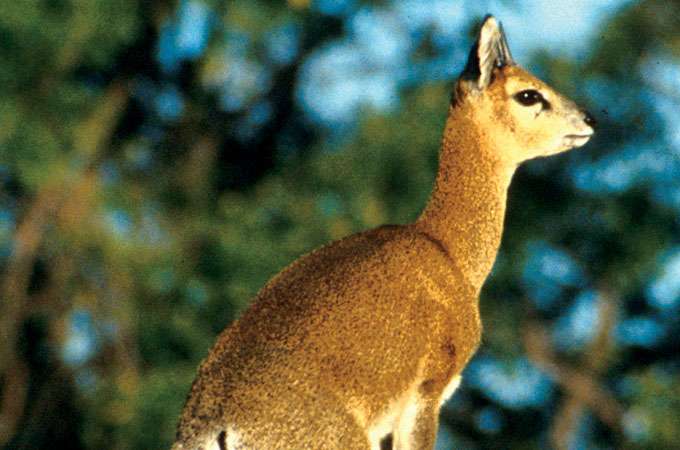 Monogamous Animals May Be More Likely to Die Out

New research reveals a surprising risk factor for extinction: monogamy. In reserves in Ghana, large mammals that live in pairs or have small harems are far more likely to die out than those with big harems.

“In avoiding extinction, it pays to be promiscuous,” says Justin Brashares of the University of British Columbia in Vancouver, who presents this work in the June 2003 issue of Conservation Biology. “This study is the first to show a strong link between social behavior and risk of extinction in mammals.”

Most studies of risk factors for extinction are based on natural extinctions through the ages — but other risk factors may be at play in today’s world, where the extinction rate is unnaturally high due to overhunting, habitat fragmentation, and other disturbances caused by people. Knowing which species are particularly sensitive to these disturbances would help conservationists figure out how to save them. Since 1970, more than half of the mammal populations in Ghanaian reserves have become locally extinct. “This shocking loss of abundance and local diversity is occurring throughout Africa,” says Brashares.

To identify risk factors for modern extinctions, he analyzed the extinctions and persistences of large mammals in six reserves in the savannas of Ghana, where the mammals have been census-ed monthly for more than 30 years and 78 local extinctions have been documented. Brashares assessed the extinction risk of nine traits (including population isolation, harem size, abundance, and how much people like to eat mammals) in 41 mammal species (9 primates, 24 ungulates, and 8 carnivores).

After accounting for the effect of reserve size, Brashares found that two of the factors studied correlated with local extinctions in the Ghanaian reserves. The first is population isolation, which is not surprising because this was previously known to be a risk factor for natural extinctions.

How could being monogamous make animals more vulnerable to extinction? No one knows for sure, but there is some evidence that hunters take more males than females from populations, which could lead to a dearth of males available for pairing in monogamous species. In contrast, species with large harems are more likely to have plenty of “spare” males. Another possibility is that when animals live in pairs or small groups, they are less likely to detect approaching hunters. “It may just be that it’s a lot easier to sneak up on one or two animals than it is 20,” says Brashares.

This work suggests that managers should target conservation efforts and monitoring on species that are monogamous or live in small groups. “This could mean using them as indicator or umbrella species, or just giving these species special attention,” says Brashares.