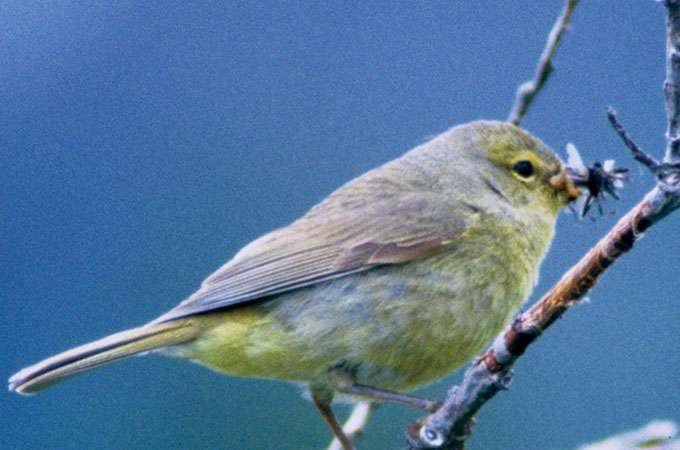 More deer may mean fewer songbirds, which could help explain the continental-scale decline of forest birds in North America and Europe. New research shows that there are only about one-third as many forest birds on British Columbian islands that are heavily browsed by deer than on those that are deer-free.

Sylvain Allombert of the Centre d’Ecologie Fonctionelle et Evolutive in Montpellier, France, and coauthors report their findings in Biological Conservation. The researchers took advantage of a natural experiment in the Haida Gwaii archipelago of British Columbia, Canada. Haida Gwaii has islands both with and without deer.

Sitka black-tailed deer (Odocoileus hemionus sitkensis) were introduced to the archipelago in 1878 and have since colonized most of the roughly 350 islands. The researchers surveyed the understory vegetation and a selection of forest birds (songbirds, woodpeckers, and hummingbirds) on six islands: two with no deer, two where deer had been present for less than 20 years, and two where deer had been present for at least 50 years and which were heavily browsed.

The results showed that the heavily browsed islands had far fewer birds than the deer-free islands. These islands had only about one-third as many birds overall and only about one-tenth as many of those birds that depend primarily on understory vegetation. Two bird species—the fox sparrow (Passarella iliaca), which nests in the understory, and the rufous hummingbird (Selasphorus rufus), which forages in the understory—are typically common but were completely absent from the heavily browsed islands.

“These results shed new light on the consequences of the current increase in deer populations in our forests and on the possible benefits of the return of their natural predator, the wolf,” says coauthor Jean-Louis Martin. Due in part to the absence of predators, deer populations are soaring in much of eastern North America and western Europe. Notably, white-tailed deer (Odocoileus virginianus) are estimated to be overabundant in nearly three-quarters of their North American range.

A documentary on this work, titled “Haida Gwaii, a Natural Laboratory,” was broadcast on French public television in April and is available on DVD in both French and English.