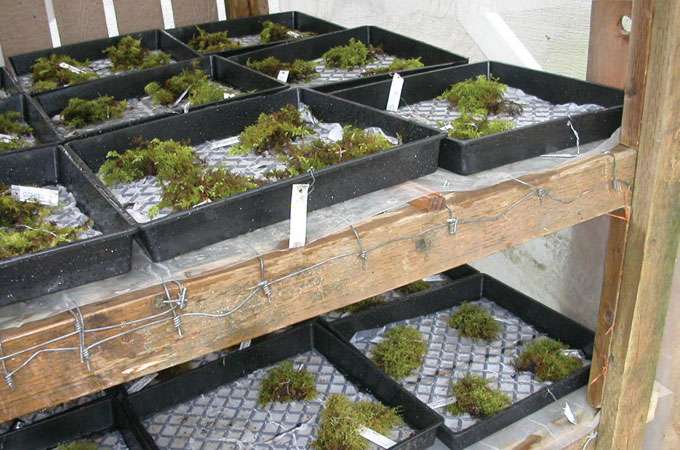 When the early woodland people of North America needed diaper material, they stripped mosses from trees, rocks, and downed limbs. Packing the plants snugly around their infants, they created a cushioned layer that could absorb ten times its weight in liquid.

The ability of mosses to sponge up moisture has not been lost on modern industry, particularly the horticultural trade. Mosses find their way into shipping material for drought-sensitive bulbs and plants. And with a little watering, they add long-lasting green accents to decorative floral wreaths, planters, and hanging baskets.

Indeed, so widespread is the commercial use of wild-collected mosses that some U.S. forests are undergoing the botanical equivalent of strip mining. According to results from a study released in 2004, the U.S. floral industry alone consumes up to 37 million dry kilograms of moss each year—for both domestic purposes and export. Patricia Muir, the study’s author and a professor of botany and plant pathology at Oregon State University in Corvallis, calculates that this amount is enough to fill some 2,400 semi trucks, most of it coming from the Pacific Northwest and the Appalachian Mountains. Although she cautions that these figures are ball-park estimates—few accurate records on permitted moss collecting are kept, and illegal harvesting is rampant—Muir speculates that the commercial value of mosses can add up to US$165 million annually.

If Nalini Nadkarni had her way, this wholesale collecting would cease. Nadkarni, a forest ecologist at The Evergreen State College in Olympia, Washington, would like to see moss farming replace collecting as the main source of moss for the horticultural trade. And she has found an unusual base of operations for her experiments to develop moss cultivation techniques—a minimum security prison.

Nadkarni has joined a growing chorus of botanists who warn that the overcollecting of mosses is doing serious harm to forest ecosystems. Anecdotal reports by scientists and land managers in the Pacific Northwest describe whole swaths of forest that have been stripped of mosses, particularly those that lie within easy reach of roads. The small body of published research on mosses suggests that these plants may play a vital role in forest ecosystems by capturing nutrients and regulating humidity and water flow. Moss mats also provide nesting habitat for the threatened marbled murrelet (Brachyramphus marmoratus) and are home to some 300 species of animals, primarily minuscule inhabitants such as mites, springtails, rotifers, and water bears.

Once removed, most mosses are slow to recolonize their former sites. Recent studies by Robin Wall Kimmerer at the State University of New York, Syracuse, show that some species recover at a painstaking rate of only one percent each year. Decades, if not more than a century, may pass before they regain their former plushness.

“It really is time that we start learning how to farm [mosses] just like we do corn and tobacco and everything else,” charges Nadkarni in a recent New York Times interview. To help realize this goal, in 2004 Nadkarni secured grants from the National Science Foundation and the Conservation Trust of the National Geographic Society.

Then she and students from the Forest Canopy Lab at The Evergreen State College teamed up with master gardener Raymond Price. A volunteer at the Cedar Creek Corrections Center, a minimum-security prison near Littlerock, Washington, Price had already organized a successful project to grow organic vegetables at the prison. In November 2004, with help from graduate student Adrian Wolf, he and several inmates turned a semi-enclosed shed on prison grounds into a moss laboratory.

For their experiment, Nadkarni obtained permits to collect four species of moss from nearby Olympic National Forest. They divided the wild-gathered plants into clumps and set them on perforated plastic trays. Project organizers trained inmates to carry out the logistics of the experiment, from rotating the trays and keeping notes on environmental conditions to watering the plants with throughfall rainwater collected from the forest.

Mosses are ideal plants for growing in a prison environment. They are hardy, take up little space and require no sharp implements for cultivation. And horticulture projects are an easier sell to prison administrators than are other kinds of programs because growing plants has been shown to have multiple benefits for incarcerated people — from offering therapeutic value to fostering development of post-prison job skills.

But raising mosses has proven far more tricky than growing corn. Despite the fact that mosses possess one of the most ancient lineages on Earth, little is known about methods for cultivating them. To date, the Cedar Creek mosses have survived captivity, but their slow growth rates limit their promise for commercial production. Future experiments call for stimulating faster growth with measured doses of nitrogen, phosphorus, and potassium. Farmed mosses that respond well to such inputs could be test-marketed through nurseries. If market responses are favorable, the prison’s greenhouses may one day reduce collecting pressures on wild mosses while providing inmates with marketable skills for life outside prison walls.

In the meantime, Price points to one proven measure of the project’s success. To date, he says, nearly two dozen inmates have cycled through the program before being released. “I still meet graduates on the streets of Olympia who come up to me and tell me how great the program is,” Price says.

Adelheid Fischer is a freelance writer based in Phoenix, Arizona.