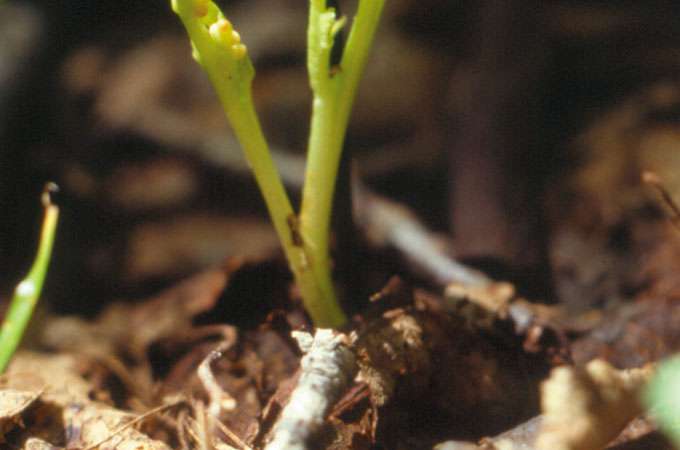 Nonnative Earthworms May Be Wiping Out Rare Plants

Most of us don’t pay much attention to earthworms but maybe we should. New research suggests that nonnative earthworms are radically changing the forest floor in the northern U.S., threatening the goblin fern (Botrychium mormo) and other rare plants.

This is “the first research to show that exotic earthworms are harmful to rare native vegetation in northern forests,” says Michael Gundale of Michigan Technological University in Houghton, who presents this work in the December issue of Conservation Biology.

About 10,000 years ago, glaciers pushed the range of North American earthworms southward, and today the only earthworms found in most of Minnesota are nonnative species introduced from Europe. Some of these earthworms eat the top part of the soil (a layer of decomposing litter called the forest floor), and this could endanger the goblin fern, a rare species that grows mostly underground.

Found only in the upper Great Lakes region, goblin ferns live between the forest floor and the underlying mineral soil. Because these tiny ferns only send up leaves briefly during the summer (and often don’t emerge at all), they are thought to get some of their energy from fungi in the forest floor instead of from photosynthesis.

Gundale found that the fern had disappeared at a third of the sites studied (9 of 28) and that these local fern extinctions were linked to two factors: the presence of a nonnative earthworm and a thinner forest floor. The forest floor at earthworm sites was only half as thick as that at worm-free sites (about 1.5 vs. 3 inches, respectively).

To confirm that this nonnative earthworm can make the forest floor thinner, Gundale added large quantities of the worm to soil cores in the laboratory. He found that after 60 days, the forest floor was only half as thick as it had been.

Gundale speculates that nonnative earthworms may reach northern forests as eggs, which are resilient and so could be spread via tires. In support of this, he observed that earthworm invasions were more severe closer to roads.

Based partly on Gundale’s work, the Forest Service is trying to protect the goblin fern by restricting logging and road building where the fern grows.