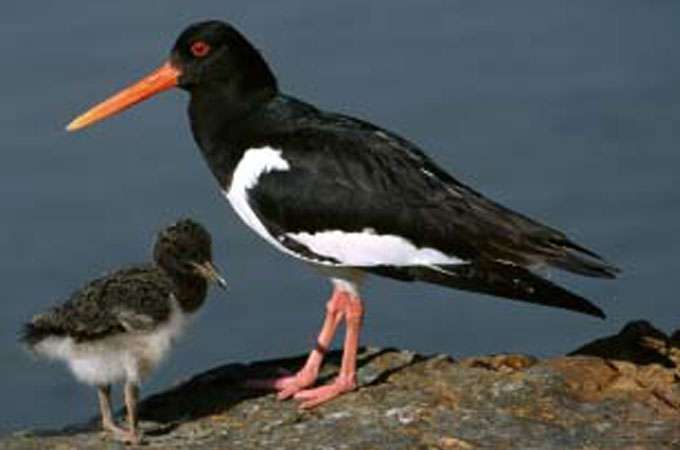 Oystercatchers Need More Than They Can Eat

Even though the Dutch set aside shellfish for mollusk-eating birds, the survival rate of these birds still drops when shellfish stocks are low. New research suggests why: oystercatchers (Haematopus ostralegus) may need nearly ten times their current allotment, largely because competition keeps many birds from getting enough to eat when shellfish are scarce.

“Even leaving enough shellfish to meet 100 percent of the birds’ demands may fail to ensure that the birds survive in good condition,” say John Goss-Custard of the Winfrith Technology Centre’s Centre for Ecology and Hydrology in Dorchester, U.K., and six coauthors in the Proceedings of the Royal Society: Biological Sciences.

Many oystercatchers and other mollusk-eating birds spend fall and winter in European coastal areas that are also commercially shellfished. When stocks of mussels (Mytilus edulis) and cockles (Cerastoderma edule) are low in the Wadden Sea, Dutch policy sets aside enough shellfish to meet 70 percent of the amount birds need to eat. This sounds reasonable because the birds will also eat ragworms (Nereis diversicolor) and other prey, even though they prefer shellfish. But switching to other prey does not seem to work in practice when shellfish stocks are low, many more birds die. This suggests that the current policy may not provide enough shellfish for the birds.

To see how many shellfish the birds really need, Goss-Custard and his colleagues modeled the survival of oystercatchers wintering in five major European estuaries (Wash, Exe, Burry Inlet, Bangor flats, and Baie de Somme). The model accounted for the birds’ feeding behavior, including where and what to eat, as well as factors that affect shellfish stocks, such as commercial harvest and storms.

The researchers’ findings confirm that current Dutch policy may not set aside enough shellfish for mollusk-eating birds. The model showed that for most oystercatchers to survive until spring, their fall shellfish allotment must be at least 2.5-7.7 times higher than what they ultimately eat. Otherwise, the birds are far more likely to starve. For example, as many as 20 times more oystercatchers die when shellfish stocks are low in the Wash, England.

Why do the birds need so many more shellfish than they will actually eat? Low shellfish stocks mean high competition for food. When too many birds are crowded into one place, the dominant birds steal food from the others and even drive them away from the feeding grounds.

These findings show that the current Dutch policy may provide only 10-25 percent of the shellfish that oystercatchers need. “The results… suggest a simple policy guideline for managing shellfisheries to sustain oystercatchers: shellfish stocks measured in the autumn should not be allowed to fall below 2.5-8 times the biomass that the birds need to consume,” say Goss-Custard and his colleagues.