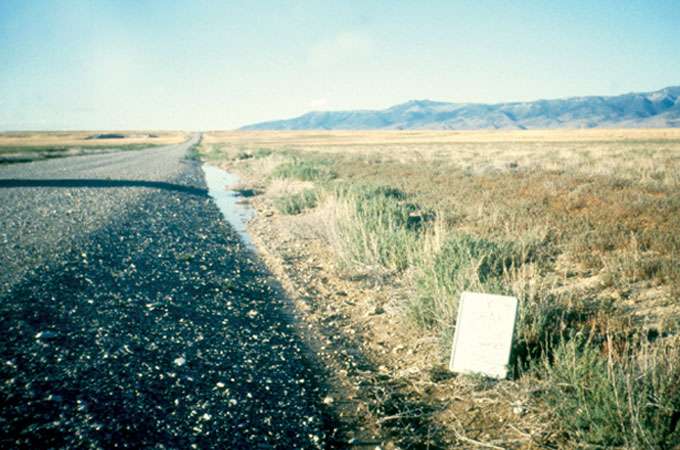 Although it is well known that roads can spread invasive weeds, new research shows that some roads are worse than others. In Utah, areas along paved roads were far more likely to be invaded than those along 4-wheel-drive tracks. This suggests that limiting road improvements could help keep out invasive weeds.

“Each step of road improvement would appear to convert an increasing area of natural habitat to roadside habitat,” say Jonathan Gelbard, who did this work while at Duke University in Durham, North Carolina, and is now at the University of California at Davis, and Jayne Belnap of the U.S. Geological Survey in Moab, Utah, in the April 2003 issue of Conservation Biology.

Cheatgrass, knapweeds, and other nonnative plants have invaded nearly 51 million hectares of the American West. Roads are a big part of the problem: for instance, vehicles can transport nonnative seeds into uninfested areas, and clearing land during road construction gives weed seeds a place to become established. Intuitively, it makes sense that improved roads would spread weeds more than would primitive roads because the former have more traffic, more exposed soil, and more maintenance such as mowing and herbicide treatments, all of which can favor invasive species.

To see if nonnative weeds really are more likely to invade along improved roads, Gelbard and Belnap surveyed the plants along 42 roads with varying degrees of improvement (paved, improved surface such as gravel, graded, and 4-wheel-drive track) in and around southern Utah’s Canyonlands National Park. The researchers determined the cover and number of species of nonnative and native plants in two areas: roadside verges (strips along the road) and “interior sites” near but not right next to roads (about 50 meters from the verge).

Gelbard and Belnap found that road improvement greatly increased the cover of nonnative plants in roadside verges. Notably, cheatgrass cover was three times greater in verges along paved roads than along 4-wheel-drive tracks (27 versus 9 percent).

In addition, verges along improved roads were wider, ranging from about 0.9 meters on each side of 4-wheel-drive tracks to 7 meters on each side of paved roads. This means that improving roads can convert natural habitat to nonnative weed-infested roadside habitat. “For example, our results suggest that improving 10 km [about 6 miles] of 4-wheel-drive tracks to paved roads converts an average of 12.4 ha [about 30 acres] of interior habitat to roadside [habitat],” say Gelbard and Belnap.

“Our findings suggest that major opportunities remain to prevent exotic [nonnative] plant invasions in this semiarid landscape by minimizing the construction of new roads and the improvement of existing roads,” say Gelbard and Belnap.