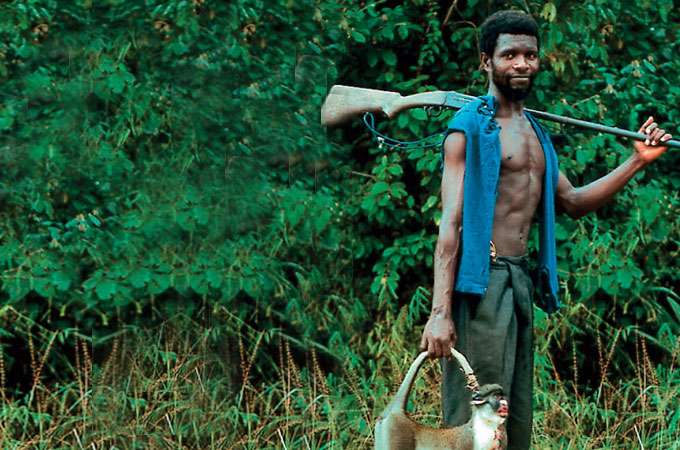 One of the keys to managing the bushmeat trade sustainably is understanding why people eat wildlife in the first place: do they want to, or do they have to? Many conservationists assume the latter, and now there is evidence that this assumption may be true in Ghana. A new analysis suggests that people there eat more bushmeat when fish are scarce.

“Identifying bushmeat’s value as a dietary staple versus a nonessential good is vital for targeting conservation interventions and, equally important, for predicting the impacts of wildlife declines on human livelihoods,” say Justin Brashares of the University of California, Berkeley, and five coauthors in the November 12, 2004 issue of Science.

The multibillion-dollar bushmeat trade is among the greatest threats to tropical animals worldwide. Although fish are the primary source of protein in West Africa, the region’s bushmeat trade is estimated at upwards of 400,000 metric tons per year and includes more than 400 wildlife species. In Ghana, wildlife has declined by an estimated three-quarters since the 1970s, and at least one-sixth of the species that have been monitored in reserves since then are locally extinct.

To help determine why people in Ghana eat bushmeat, Brashares and his colleagues used existing data to assess both the fish harvest and the abundance of 41 wildlife species in six reserves over nearly 30 years (1970-1998). The researchers predicted that, if people eat bushmeat because they have to, then drops in the fish supply would mean more hunting and thus fewer animals in the reserves.

As predicted, the abundance of wildlife in reserves varied with the fish supply, dropping when the harvest was low and rising when the harvest was high. Several other lines of evidence support the conclusion that the bushmeat trade is linked to the fish supply; notably, when the fish harvest was low, more hunters were observed in reserves and more bushmeat was sold in markets. “Local market data . . . show bushmeat’s role as a dietary staple in the region,” say Brashares and his colleagues.

The good news is that this work suggests that West Africa’s bushmeat trade would decrease if the fish harvest increased. The bad news is that increasing the fish harvest will not be simple. Since the 1970s, the number of people in the region has tripled and fish stocks have dropped by half. Commercial fleets have expanded considerably, with the European Union harvesting 20 times more fish in the region than in the 1950s. Moreover, foreign pirate vessels commonly fish illegally in West African waters.

The researchers’ recommendations include limiting foreign fleets to make more fish available locally in the short term and improving fisheries management to protect West African stocks over the long term. “Our results emphasize the urgent need to develop cheap protein alternatives to bushmeat and to improve fisheries management by foreign and domestic fleets to avert extinctions of tropical wildlife,” say Brashares and his colleagues.