In an unexpected twist, new research shows that feral pigs are contributing to the decline of foxes on California’s Channel Islands. The story is that the pigs provide enough prey to support a breeding population of golden eagles, which are not native to the islands and find the foxes to be easy pickings.

“We suggest that feral pigs acted as an abundant food that enabled mainland golden eagles to colonize the Channel Islands, increase in population size and overexploit the unwary island fox,” say Gary Roemer and his four colleagues in the November issue of Animal Conservation. Roemer did this work at the University of California Los Angeles and is now at New Mexico State University in Las Cruces.

Found only on six of the eight Channel Islands, which lie roughly 25 miles off the coast of southern California, island foxes (Urocyon littoralis) are particularly vulnerable to golden eagles (Aquila chrysaetos). The house-cat-sized island fox lacks natural predators and so presumably does not avoid raptors; unlike most canids, it is active during the day when raptors hunt.

Radio-collar studies showed that eagles are preying on foxes at a tremendous rate on Santa Cruz Island. Over a year, 21 of the 32 tagged Santa Cruz foxes died and Roemer and his colleagues attributed 90 percent of these deaths to eagles, based on talon holes, damage to fragile bones, and other signs of raptor feeding.

The next question is why there are so many golden eagles on Santa Cruz Island. Golden eagles are not native to the Channel Islands and historically only visited transiently from the mainland. The answer is the feral pigs that roam the islands, say Roemer and his colleagues.

In support of their hypothesis, a predation model shows that the Santa Cruz eagles are living on more than foxes. If foxes were their only prey, five eagles could have wiped them out in just four years. But with the large pig population, it would take 12 years for seven eagles to wipe out the foxes. The latter model fits with the foxes’ actual rate of decline of 90 percent in six years.

Roemer and his colleagues propose a four-pronged approach to protecting the island fox: 1) relocating golden eagles, 2) eradicating feral pigs, 3) captive breeding and reintroduction of island foxes, and 4) reintroducing the islands’ native bald eagles, which preyed primarily on fish and were so territorial that they presumably kept golden eagles away. “It is highly probable that bald eagles acted as a deterrent to golden eagles and that their extirpation paved the way for colonization by golden eagles,” say the researchers.

In a related paper, Roemer and his colleagues show that colonization by golden eagles has also changed the northern Channel Islands’ ecology in other ways, notably by benefiting the island spotted skunk (Spilogale gracilis amphiala). “The decline of foxes coincided with a 17-fold increase in the capture success of the island skunk,” say the researchers in the January 22 issue of the Proceedings of the National Academy of Sciences. Fewer foxes mean more mice and insects for skunks to eat and, unlike the island fox, the island skunk is largely nocturnal and so escapes eagle predation. 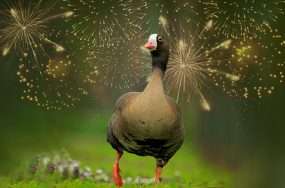