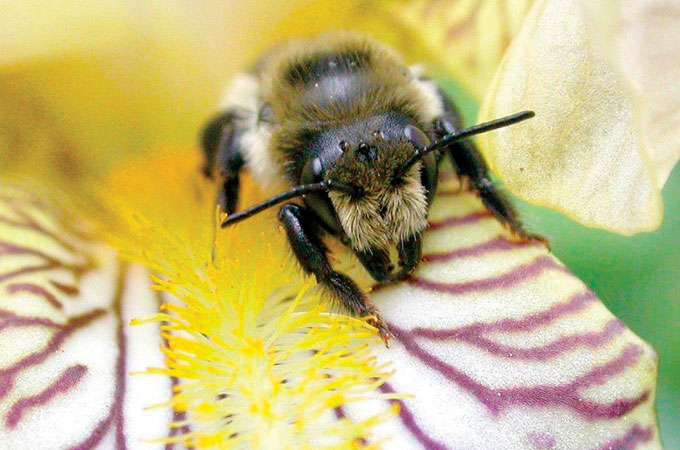 Wild bees can boost crop pollination, but little is known about how much habitat they need to provide this ecosystem service. New research gives farmers and land planners specifics and shows that conserving as little as one-tenth of the nearby wild bee habitat can provide up to 40 percent of the pollination needs to watermelon farms in northern California.

Interest in using native bees to pollinate crops is rising, in part because the widely-used European honeybee populations in the U.S. have declined by more than half since 1946. In addition, wild bees pollinate some crops more effectively than honeybees do. For example, female watermelon flowers need 500-1000 pollen grains to set marketable fruit, and some native bee species deposit roughly 10 times more pollen than honeybees do (about 200 vs. 20 grains per visit).

To help quantify how much habitat wild bees need to provide a given level of pollination services, Kremen and her colleagues assessed both native bee pollination and the proportion of natural habitat within 2.5 km of 34 watermelon farms in northern California. Thirty species of native bees in the region pollinate watermelon, and flower visits longer than a second were used as a measure of pollination services. About one-third of the farms were organic and the rest were conventional; the nearby natural habitats were riparian forest and upland (oak woodland and chaparral).

This work shows that a little habitat can go a long way toward boosting pollination services. Moreover, 10 percent might actually be a realistic target for upland habitat near farms in California, say the researchers. Reaching this target would entail a combination of conservation and restoration in the state. The Inner Coast Range and the Sierra foothills still have upland habitat that could be protected from urbanization and vineyard expansion. In contrast, the Great Central Valley has very little natural habitat left, but farmers there could restore native plants in non-farmed areas-for example, around fields and barns and along roads and irrigation ditches.