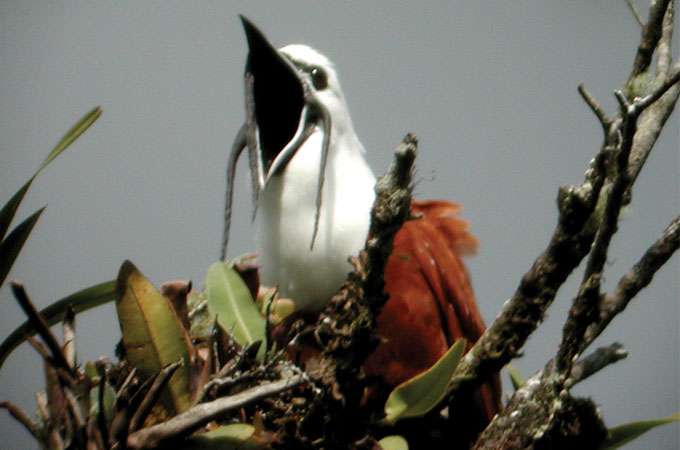 When it comes to endangered species, there’s much more at stake than biodiversity. The many ecosystem services that animals provide are also at risk. A new analysis projects that one-fourth of bird species will become so scarce over the next century that they might as well be extinct, thereby disrupting vital services — from dispersing seeds to controlling pesky insects to scavenging animal carcasses.

“[This is] a critical and vastly underappreciated dimension of extinction — the degradation of the ecological roles played by species as they slip toward extinction,” says Kent Redford, Director of the Wildlife Conservation Society Institute in Bronx, New York. This work is reported by Cagan Sekercioglu, Gretchen Daily, and Paul Ehrlich of Stanford University in California in the December 28, 2004, issue of Proceedings of the National Academy of Sciences.

Sekercioglu and his colleagues focused on birds because they are the best-known group of animals. Partly on the basis of IUCN (World Conservation Union) extinction probabilities for the next century, the researchers compared current and expected distributions of threatened birds by functional group (such as fruit- or fish-eaters), habitat (such as forest or wetland), and region (such as Indomalayan or Neotropical).

Worldwide, the bird population is estimated to have dropped by roughly one-fifth since 1500. By 2100, the researchers expect that as many as one-fourth of bird species will be functionally extinct and thus barely contribute to ecosystem processes; they also expect that another one-fourth will be functionally deficient and thus contribute significantly less to ecosystem processes. The researchers found that more than 600 of the 9,787 bird species are functionally extinct and another roughly 2,000 are likely to become functionally extinct during the next century. Some functional groups are more at risk than others. At the low end, about one-sixth of bird species that eat nectar or seeds are extinction-prone; at the high end, nearly two-fifths of scavenger species are extinction-prone.

“Important avian guilds are in rapid decline, and consequent reductions in ecosystem services are likely,” say Sekercioglu and his colleagues. Potential ecological consequences include extinctions of plants that depend on birds for pollination and seed dispersal, increases in the numbers of insect pests, increases in crop damage, and spread of human diseases via rotting animal carcasses.

Sekercioglu notes that, although their work has been covered by the mainstream media, most attention has focused on bird extinctions rather than on the loss of the ecosystem services they provide. Even so, the media splash may have brought the ecological consequences of wildlife declines to the attention of policy makers: Connecticut Senator Joe Lieberman, a Democratic member of the U.S. Senate Committee on the Environment and Public Works, has requested a copy of this paper.