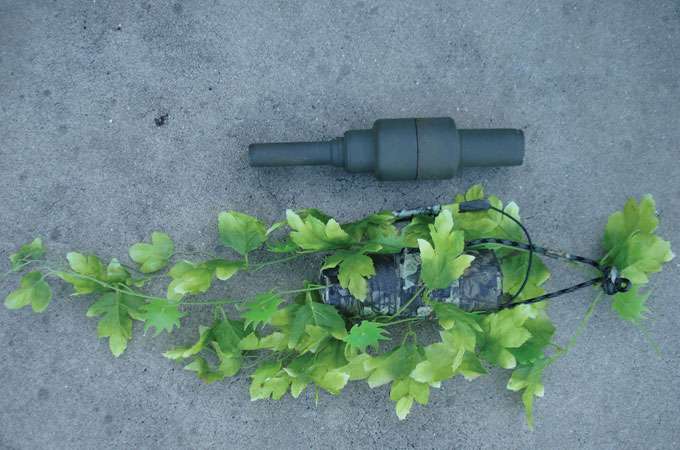 Of all the animals in the Republic of Congo’s Nouabalé-Ndoki National Park, from gorillas to buffalo to some 3,000 threatened forest elephants, the human is the most powerful animal of all. And it is unique for having something no other animal possesses: metal.

“We are the iron-carrying ape,” says Steve Gulick, a visiting scholar at the State University of New York College of Environmental Science and Forestry.

When the metal in tow is a machete or a gun, it gives poachers an outsized advantage over their quarry. But now Gulick hopes to turn the tables on poachers with the TrailGuard, a hidden metal detector that is bringing military technology to the field of conservation. “This kind of technology is well established,” says Gulick. “It’s just not being used by conservation.”

With satellite links that can alert authorities miles away, the detectors can act as eyes and ears for parks personnel, who have vast areas to patrol and not enough people to patrol them.

Remote metal detectors were first used in Vietnam, where the U.S. military set up devices to detect Vietcong troop movements on the supply route popularly known as the Ho Chi Minh Trail. At the time, an airplane would have to circle nearby to pick up a signal from the detector. Now, satellite and Internet technology have made remote metal detectors ubiquitous and more versatile.

The TrailGuard is a 25-centimeter-long cylinder that can be buried in the ground on routes frequented by poachers. When someone carrying a large piece of metal passes within a few meters, he or she trips a magnetometer that sends a radio signal to a nearby satellite uplink which can then alert authorities by email, text message, fax or pager. In addition to betraying a hunting party’s location, the device will indicate its direction and how many people are in the group.

This April, Gulick plans to install half a dozen TrailGuards in the Goualougo Triangle, a 250-square-kilometer area at the southern end of the Nouabalé-Ndoki park, where researchers are studying the central subspecies of chimpanzee (Pan troglodytes troglodytes). The project, funded by the Wildlife Conservation Society (WCS), will serve as a control, with Gulick treating passing researchers as “pseudopoachers” and checking for false alarms from the equipment.

Gulick also plans to install the TrailGuard in other areas to establish how regularly they are being traveled. Many of those areas in the Nouabalé-Ndoki park are off limits to people, so “anyone detected is presumably a poacher,” says Gulick.

For now, the park is so vast, at more than 4,000 square kilometers, that it is virtually impossible to patrol in hopes of catching poachers in the act. If rangers do come upon poachers by chance, they risk being overwhelmed by greater, more heavily armed groups. More often than not, rangers and researchers come upon a kill after the fact. Gulick, who has been helping the WCS patrol since 1994, once found more than 200 rotting elephant carcasses in a single sweep.

TrailGuard, says Gulick, should help put the right number of officials in the right place at the right time. It can also help give managers traffic data so they can figure out where best to locate rangers.

Already Gulick is fielding inquiries from researchers for other applications. Jim Sanderson, a Conservation International ecologist studying the little-known Chinese mountain cat, is interested in having the TrailGuard alert him when a trap has been sprung. “Often the traps are quite far to walk to and we use a dozen of them. We need to check twice a day or more. Ideally we would know instantaneously when they make a capture,” says Sanderson. A TrailGuard alert could save Sanderson as much as eight hours. That’s eight hours he can spend doing other work. It’s also eight hours an animal won’t spend in a trap.

image: Metal detector TrailGuard (top) and one version of the Internet gateway (below). The TrailGuard is 25 cm long.