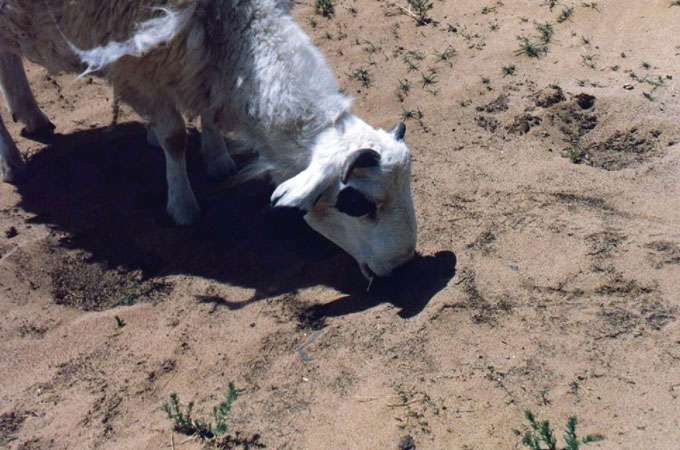 China has both the largest human population and the largest continuous grassland in the world, and the former makes it hard to protect the latter. So many people are grazing livestock in the Inner Mongolian steppes that the steppes are being destroyed. New research suggests a win-win solution: concentrating people in cities could both improve their lives and protect the steppes.

“The degradation in Inner Mongolia is so serious that the land can hardly support the human population,” say Gaoming Jiang and four coauthors in the September 2003 issue of Environmental Conservation. “To restore the degraded steppes…the people involved should be carefully managed or moved out of the destroyed grasslands.”

Nearly a third of China — more than two million square kilometers — is grassland and besides being the largest in the world, it is also among the most degraded. But conserving China’s protected grasslands is tricky because there are so many people living there, especially in the steppes. Inner Mon-golia’s Xilingol Biosphere Reserve has 134,000 people and such severe steppe degradation that dust from sand storms can blow all the way to Beijing, a distance of about 250 miles. Established in 1985, the 10,000-square kilometer reserve has two urban areas: Xilinhot City and Baiyinxile Town.

To see if concentrating people in cities could help protect the steppes, Jiang and his colleagues assessed degradation in Xilingol Biosphere Reserve partly on the basis of satellite images and field surveys. Measures of degradation included shorter plants and fewer edible grasses. The researchers also used existing data that has been collected since 1947 to determine trends in the number of people and livestock in the reserve.

Jiang and his colleagues found that nearly three-quarters of the reserve’s land is degraded. Worst off are the high plains and hills, where roughly 90 percent of the land is degraded. The researchers also found that the number of people living in the reserve has risen from about 500 in 1947 to the current 134,000. One of the reasons for this increase is that the government encouraged immigration to the area in the 1960s. More people meant more livestock, and the number of sheep and goats in the reserve has risen from about 3,000 in 1947 to about 1.8 million today. “The increase in sheep and goats is especially deleterious to the steppe ecosystem,” say the researchers.

Jiang’s previous research suggests that the degraded steppes would recover on their own if protected from overgrazing. Thus, Jiang and his colleagues recommend moving the people living in the reserve’s steppes to its urban areas. Besides protecting the steppes, this would also benefit the impoverished pastoral people by providing them with educational opportunities, social welfare services, and other amenities of city life. “This is all attractive to the population of the degraded steppe areas,” say the researchers. As a result of this work, the local authorities are now developing an immigration plan for the people living in the reserve’s steppes.