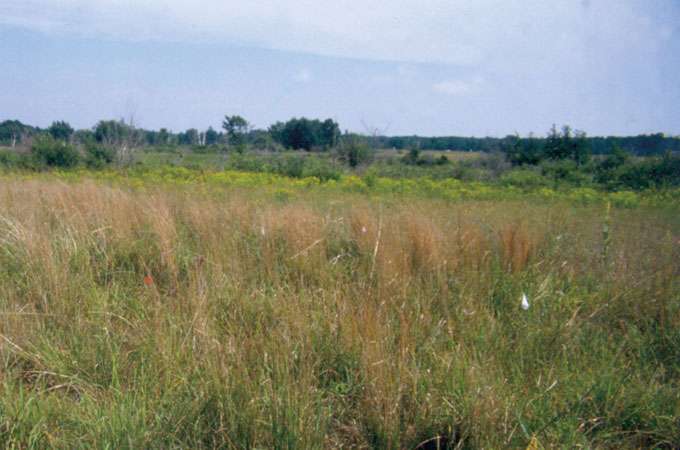 Although it makes sense that restoring native plants could help control invasive weeds, no one knows if it would really work. New research makes a good case for this approach: restoring tallgrass prairie in old fields decreased the weed biomass by nearly 95 percent. Moreover, restoration may ultimately be easier and cheaper than traditional ways of controlling weeds.

“The potential weed control benefits of restoration could provide a powerful incentive for restoring native plant communities,” say Dana Blumenthal, Nicholas Jordan and Elizabeth Svenson of the University of Minnesota at St. Paul in Volume 7, Number 1 of Conservation Ecology. “It may be possible…to manage simultaneously for diversity and weed control.”

Right now, controlling weeds in places like roadsides and field edges typically means mowing, tilling, and/or using herbicides each year, which is time-consuming and expensive. For example, controlling weeds on U.S. highway rights-of-way cost an estimated US$276 million in 1994. In contrast, restored prairie is so low-maintenance that burning every few years is likely to be enough to control weeds.

Blumenthal and his colleagues tested how weeds were affected when old fields were restored to tallgrass prairie in the Cedar Creek Natural History Area in Bethel, Minnesota. The researchers compared the weeds in three types of study plots: unrestored old field (primarily nonnative grasses); seed-only restored tallgrass prairie (which entailed sowing seeds of five prairie grasses and 15 prairie forbs); and intensively restored tallgrass prairie (which entailed treating the site with herbicides, burning, and rototilling prior to sowing the seeds). Seven years after the prairie restoration, the researchers compared the weed biomass and stem numbers in the restored and unrestored plots.

To make sure that the observed weed control was due to restoration, Blumenthal and his colleagues did a companion study (submitted to Oecologia) that included separating the effects of restoration from factors such as weed seed variability. To equalize numbers of weed seeds, the researchers added large quantities of seed from 12 locally-abundant weed species (2-3 grams per square meter for each species) to both restored prairie 6 years after restoration as well as old field plots. The researchers then monitored these “added” weeds during the 2 following years.

Blumenthal and his colleagues confirmed that prairie restoration greatly decreased the density, size, and biomass of the “added” weeds. Notably, intensive restoration reduced the biomass of these weeds by 93 percent in the first year after the seeds were added.

Prairie restoration is more likely to control agricultural weeds than those that invade natural areas, say the researchers. This is because agricultural weeds typically grow fast and make lots of seeds and so do best in disturbed areas where there is little competition from other plants. In contrast, the types of weeds that invade natural eco-systems tend to live longer and be more competitive.