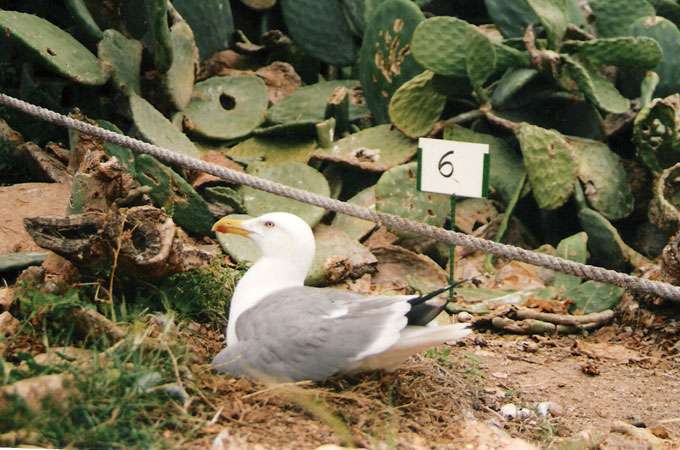 Habitat restoration can have unexpected and unwanted effects. New research shows that restoration efforts on a small Mediterranean island helped a gull that was already superabundant and that preys on two at-risk seabirds.

“When designing a conservation project, you have to be concerned with the side effects your actions can cause, especially in places such as the Mediterranean, where the human hand has shaped natural systems for thousands of years,” says Alejandro Martínez-Abraín of IMEDEA (CSIC-IUB)1 in Palma de Mallorca, Spain, who, with five coauthors, reported this work in the September 2004 issue of Environmental Conservation.

Benidorm Island has long been overgrown by prickly pear cactuses (Opuntia maxima), which were introduced from the New World in the mid-1500s, and has more recently been overrun by tourists, who can easily reach the 6.5-hectare island because it is only 3 km from the mainland. This habitat degradation is no problem for the yellow-legged gull (Larus michahellis), which has thrived to the point that it is considered a pest locally. But these changes are a big problem for two species of at-risk seabirds that the yellow-legged gull preys on, the European storm petrel (Hydrobates pelagicus) and Audouin’s gull (Larus audouinii). Benidorm has one of the largest remaining colonies of European storm petrels in the western Mediterranean and a captive-rearing program for Audouin’s gulls.

The island was designated a European Union Special Protection Area for birds in 1990, and the best way to restore it seemed to be a three-pronged approach of controlling the prickly pear, the tourists, and the yellow-legged gulls. Since 1999, about 200 metric tons of prickly pear have been removed, and tourists have been restricted to the main trail. In 2002, the researchers pricked the eggs in one-third of the yellow-legged gull nests.

Much to their surprise, however, the researchers found that the gulls ended up doing even better than before. The colony grew from about 300 pairs to 400-600 pairs, and the number of fledglings per pair increased by 75 percent (from 0.4 to 0.7). What went wrong? The researchers attribute the colony’s growth to the fact that tourists were no longer running all over the island, thus giving the gulls more nesting habitat. The higher number of fledglings may arise from the fact that the chicks in untouched nests had bigger territories and so were less vulnerable to being eaten by adult gulls.

The researchers have since brought the yellow-legged gull’s fledgling numbers back down by pricking more eggs, although such cullings are controversial. It turns out that removing the prickly pear could also help control these pest gulls, which prefer to nest in the cactuses’ shade. Either way, restoring Benidorm remains a work in progress. “Gulls are long-lived, and all these management activities are of no use unless applied at a large scale and during a long period of time,” says Martíez-Abraín.