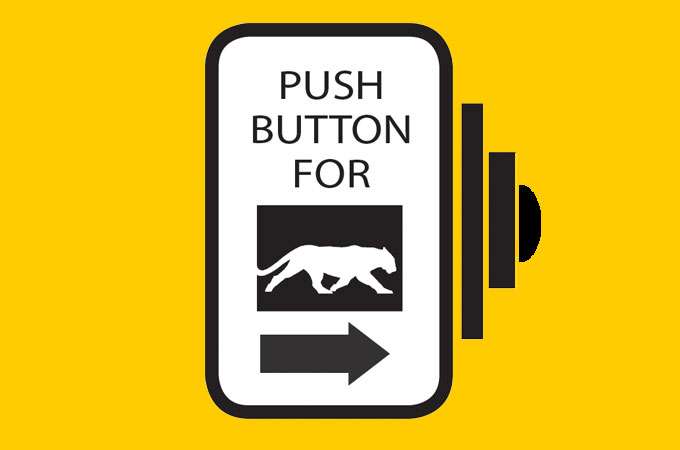 The deer is broken, legs akimbo, and lies ragged at the side of the road. Another car passes by, its driver scarcely noticing the carnage. Road kill, after all, is commonplace. On the average day in Michigan, a car brings down a deer once every eight minutes. In 2002, more than 100 black bears died on North Carolina roads. And in a single month, a sampling of road kill in just five states counted 15,000 dead reptiles and amphibians, 48,000 mammals, and 77,000 birds.

We know that roads fragment habitat, disrupt migration corridors, and expose sensitive species to a deadly array of hazards. And now, rather than the simple road kill accounts that dominated the literature from the 1920s to 1970s, ecologists are recognizing road kill as part of a larger threat to wildlife. For rare or isolated populations, vehicle collisions can be a matter of life or death—not just at the individual level but also for entire species.

At the University of Florida, Daniel Smith is one of the scientists at the vanguard of the field. Working collaboratively with the Florida Department of Transportation (DOT), Smith and his colleagues in the Department of Wildlife Ecology and Conservation developed a computer-based model that identifies ecological hotspots—sections of road where high quality habitat, vehicles, and vulnerable species intersect—and integrated its use into statewide transportation planning. It’s an effort that could help coax species such as the Florida panther (Puma concolor coryi), American crocodile (Crocodylus acutus) and Florida Key deer (Odocoileus virginianus clavium) back from the brink of extinction. Adaptable and easy to use, the highway hotspots model can also help guide conservation strategies that reach far beyond Florida.

Road ecologists are now confirming what many road engineers likely knew all along: that not all roads are equal. In fact, even individual segments of the same road can vary dramatically in how animals perceive, use, or cross them. Some stretches of road are simply more important—and more deadly—than others. From 1976-1999, four of every five black bears killed on Florida highways died on just five roads near the Wekiva River and Ocala National Forest north of Orlando.

The question is why? Higher vehicle speeds, heavier traffic, and wider roads definitely make crossings more treacherous. But another critical factor is where human highways cross wildlife highways. More often than not, road kill peaks where wildlife corridors such as riparian zones or strips of forest intersect with roads.

And that’s where Smith’s model comes in. He gathered data on chronic road kill sites, wildlife movement corridors, and eight other key factors and plugged them into a computer to reveal ecological hotspots. Smith then took his results into the field to look at 1,400 sites first-hand to make sure that the streams or forests or roads matched the descriptions that came out of his model. They did. Not only that, but when Smith checked out 290 of these hotspots in-depth—monitoring wildlife movements, tracks, and other signs of activity for a period of two years—he found that animals were actually using the areas much like his model had predicted.

In response, Florida transportation officials are now installing underpasses at dozens of these locations so that everything from black bears and panthers to tree frogs and turtles can make safer crossings. In Wekiva State Park, on either side of a new underpass, a barrier fence extends to block highway crossings and channel wildlife to a safer tunnel. Hidden cameras at the site show that bears not only use the new structure, they seem to remember it. When the fence first went up, bears snuffled along its edge looking for a gap. Now, they tend to make a beeline for the underpass.

The increased ecological understanding of roads has led, in a growing number of places, to elegantly simple solutions. Tapping the insights of engineers and biologists alike, highway planners can use common highway structures such as bridges and culverts to help wildlife cross to safety. Keen-eyed Florida motorists may now spot concrete or metal culverts—the large drainage pipes often installed beneath roads—placed strategically to make roads more porous to both wildlife and water.

On Big Pine Key, highway traffic was the number one killer of the endangered Florida Key deer. Two Winnebago-sized culverts and an eight-foot-high barrier fence now usher deer beneath the highway without their needing to dodge cars en route. Scientists had also identified vehicle collisions as the leading cause of death for the rare Florida panther throughout the 1980s. As part of a road expansion project, highway workers installed two dozen wildlife underpasses in key locations along the lethal Interstate 75 corridor in Big Cypress National Preserve. Panther deaths on the highway over the ensuing years dropped to zero.

On average, Florida adds 2,400 kilometers of paved road each year. By matching road projects up front with one of the 15,000 hotspots that came out of Smith’s model, Florida transportation officials can now make conservation a part of routine highway maintenance.

Bridges are a case in point. The Federal Highway Administration estimates that about 2,500 bridges come up for repair or replacement annually in the U.S. and currently rates more than 110,000 bridges as structurally deficient. Although that may not be good news for motorists, particularly those in bridge-quaking trucks, it presents a great chance to improve wildlife passage. Longer bridges that span swaths of land on both sides of the riverbank allow terrestrial as well as aquatic species to move safely underneath. Florida DOT is replacing and modifying bridges at a number of creek and river crossings to extend the safe zone. At the site of an isolated bear population near the Wekiva River, the Florida DOT increased the span of a bridge by 45 meters so bears and other terrestrial wildlife could find a way to maneuver beneath it without having to swim.

The beauty of Smith’s ecological hotspots model is that it works at multiple scales—from a statewide program down to individual road projects or even a single culvert. In fact, with technologies such as remote active infrared cameras, hair snares for DNA testing, radio telemetry, and the Global Positioning System, biologists can track an animal’s every move. Smith’s work is already demonstrating that these measures can allow scientists and road planners to monitor how animals use or avoid road sections, newly installed culverts, fences, and corridors beneath bridges.

Smith and his colleagues in Florida are not alone in their thinking. On a nationwide scale, the Netherlands is at the forefront of efforts to integrate transportation and ecological networks. In a process approved by parliament and passed into law, Dutch planners identify conflicts between transportation and environmental goals by layering maps of the nation’s road system over ecological networks such as large areas of vegetation, wildlife corridors, and wetlands. Where the overlays show a bottleneck—roads intercepting key flows of water or wildlife for example—transportation and conservation officials can change road designs, add culverts, or modify vegetation.

Roads still fragment habitat—even with crossing devices. But as road ecology comes of age in Florida and elsewhere, a variant to an age-old question may finally be put to rest: Why did the panther cross the road? Thankfully, it never needed to.

ANIMAL-VEHICLE COLLISIONS BY THE NUMBERS

5.5 million reptiles and per year in Australia

The effort to make roads less deadly goes beyond underpasses, road fencing, or similar attempts to modify wildlife behavior. On a scenic and road kill-prone stretch of highway in the northwest corner of Yellowstone National Park, Marcel Huijser from the Western Transportation Institute is experimenting with active detection systems that shoot a beam of high-frequency radio waves along roadsides. When a large animal such as an elk, bear, or bison breaks the beam, the system activates flashing lights and audio signals to alert motorists that an animal may be crossing the road in front of them. This approach allows animals to move across roads freely, rather than limiting them to isolated crossing points such as underpasses. But it also means that wildlife and motorists must share the road—which is what causes road kill in the first place. For more information: mhuijser@coe.montana.edu

This is a collaborative site that includes the Wildlife Crossings Toolkit, links to other wildlife, transportation projects, photos, and frequently asked questions.

Center for Transportation and the Environment www.itre.ncsu.edu/

David Havlick is an instructor for the Wild Rockies Field Institute and author of No Place Distant: Roads and Motorized Recreation on America’s Public Lands (Island Press, 2002).