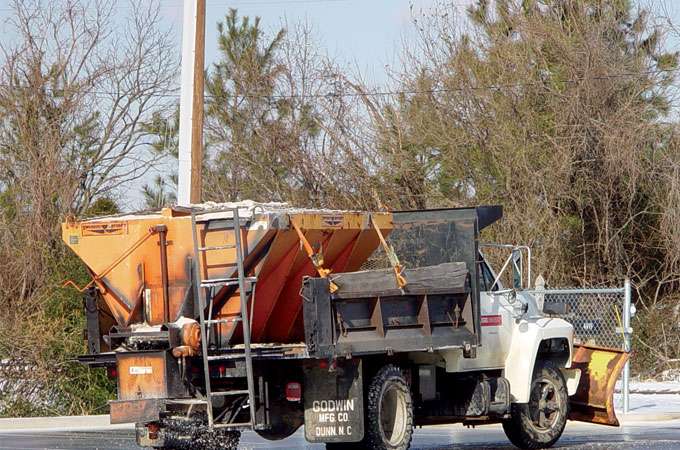 New research shows that chloride levels are rising so fast that many streams in the northeastern U.S. could be toxic to sensitive freshwater life by the next century.

Salt contamination is “one of the most significant threats to the integrity of freshwater ecosystems in the northeastern United States,” say Sujay Kaushal and seven coauthors in PNAS. Kaushal did this work while at the Institute of Ecosystem Studies in Millbrook, New York, and is now at the University of Maryland Center for Environmental Science’s Appalachian Laboratory.

Most of the contamination comes from the salt used on icy roads during winter. Road salt is primarily sodium chloride, and chronic chloride levels as low as 0.25 grams per liter can harm freshwater life. By comparison, seawater has about 15-20 grams of chloride per liter.

The researchers determined chloride levels in both rural and urban streams. They used about 30 years’ worth of data from streams in three rural areas—Baltimore County, Maryland; the Hudson River Valley, New York; and the White Mountains, New Hampshire—and five years’ worth of data from streams in the Baltimore metropolitan area. The researchers also used the urban data to correlate stream chloride levels with the area covered by impervious surfaces such as roads. Baltimore’s impervious surface coverage increased by nearly two-fifths in just 14 years (1986-2000), and the city used more than 82,000 metric tons of road salt during the study period.

Chloride levels have increased greatly in rural streams, as much as doubling in the Hudson Valley and quadrupling in Baltimore County within the last two decades. And in White Mountain streams near Interstate highways, chloride is now spiking above 0.1 grams per liter, which is about as salty as the Hudson River estuary where freshwater and seawater meet.

Freshwater salt contamination is even worse in the city of Baltimore, where many streams already exceed the chloride threshold of 0.25 grams per liter for harming sensitive freshwater life. Chloride levels in some streams can reach about 5 grams per liter, which is one-fourth as salty as seawater. The researchers found that the chloride threshold was reached in areas with more than 40 percent impervious coverage. Presumably, streams are even saltier in big cities farther north because they have far more snow and so use far more road salt.

Stream chloride levels were highest in the winter but remained elevated year-round, presumably because the groundwater has also gotten saltier. “What is really interesting is that salt may be building up in aquifers and so may have long-term impacts,” says Margaret Palmer, Director of the Chesapeake Biological Laboratory in Solomons, Maryland. Indeed, the researchers warn that the region’s streams could remain salt-contaminated for decades, even if the use of road salt is curtailed.