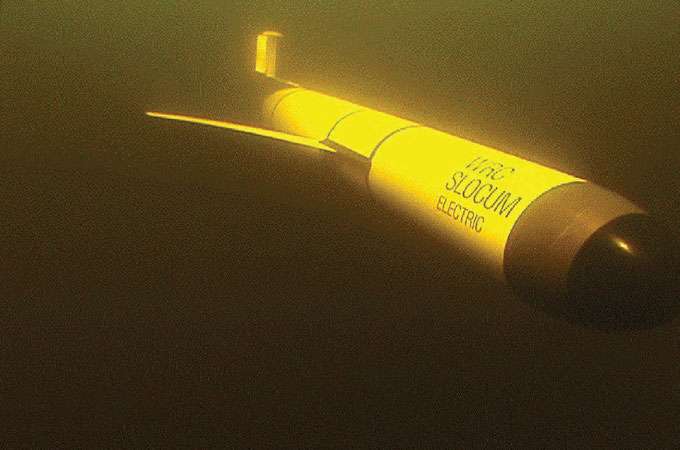 An underwater robot that can hear the calls of whales, and so help ships to avoid them, has just been successfully trialed in the Bahamas. The scheme relies on a torpedo-shaped glider that zigzags through the ocean. It can dive down as far as 200 meters below the surface and directs itself by shifting a weight from fore to aft. A microphone attached to the bottom of the glider can pick up calls from all whales, including the high-frequency call of the beaked whale, which until now has been difficult to detect. The glider returns periodically to the surface to radio its data back to base, or—if that’s too far away—it can call a satellite phone and send its information anywhere in the world.
The new device is mounted on a Slocum Glider—a craft built by Webb Research, a company based in Falmouth, Massachusetts. “We are entering a new era of underwater sensing,” says Jim Theriault of Defence Research and Development Canada, in Dartmouth, Nova Scotia, who ran the trial. “We can put a glider in the Bahamas and monitor it in Nova Scotia.”

The hope is that naval or other ocean-going operations that use sonar will be able to more easily track where whales are and so avoid using their noisy equipment when they are close by. There is circumstantial evidence that sonar can upset whales, and a number of strandings have been seen shortly after naval sonar operations. “We’re trying to lower the potential risk by knowing the animals are there,” says Theriault.

Baleen whales have been tracked by autonomous gliders before, by researchers at Woods Hole Oceanographic Institution, Massachusetts. But it is easier to hear the baleen whale, with its lower-frequency call, than the beaked whales, says Theriault. More data need to be collected to capture higher frequencies, he notes, and this has been a limitation for the relatively small, simple systems used on autonomous subs.

Theriault’s glider has a signal processor capable of collecting those data. It can also use the frequency and pattern of detected calls to tell the difference between species; initial analysis is done on the glider before it comes to the surface. “At that point it already thinks it knows whether it has a beaked whale or a sperm whale,” says Theriault.

Another major limitation in whale tracking has been data transmission—previously observers had to follow their gliders on a ship and stay in the line of sight of the contraption. Other methods to listen in on whale conversations have used fixed microphones on the ocean floor with a cable leading back to shore. Being able to move around and transmit data across the world is a major advantage. “With this sort of device you could survey a much wider area,” says Peter Liss from the University of East Anglia in Norwich, U.K., chairman of the U.K. government’s Inter-Agency Committee on Marine Science and Technology. “It sounds like a very good idea.”

Liss suggests that these gliders could be used in research to finally pin down whether noise does actually upset whales. “The link is probably there, but rather tentative,” he says. Since the glider is quiet and isn’t being followed at a close distance by a noisy ship, it should be able to gather the data needed to prove—or disprove—a link between sonar and whale strandings, he suggests.

The glider being trialed runs on batteries and can last up to a month. But plans are afoot to make a low-power glider that can prowl the oceans for up to five years. To do this, the glider would contain a waxy gel that changes density under different temperature conditions, thus changing its buoyancy. This would make the glider rise and fall as it entered warm and cold patches of water. Temperature and phase changes in the gel could also be harnessed to charge a battery.