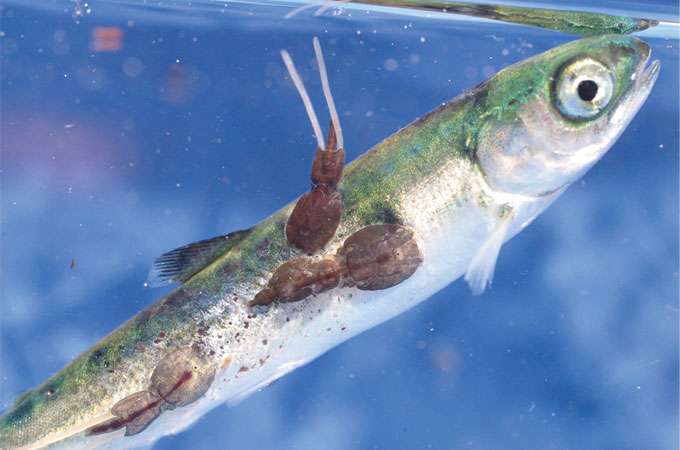 Conservationists and aquaculturists are at odds over whether fish farms threaten wild stocks by spreading diseases. Now, new research shows that coastal salmon farms spread sea lice to juvenile wild salmon, killing up to 95 percent of the smolts as they migrate from rivers out to sea. Although young salmon commonly catch lice from adults, the two age groups don’t mix in the wild until the smolts have been at sea for several months, when they are bigger and more tolerant of the parasites.

“Fish farms undermine a functional role of host migration in protecting juveniles from parasites associated with adults,” say Martin Krkošek of the University of Alberta in Edmonton, Canada, and four coauthors in Proceedings of the National Academy of Sciences.

As the number of salmon farms has risen, so have infestations of sea lice (Lepeophtheirus salmonis) in juvenile wild salmon in Canada, Ireland, Scotland, and Norway. To see whether these infestations are contributing to the decline of wild salmon, the researchers studied smolts migrating past salmon farms near Vancouver, British Columbia. The researchers counted the lice on more than 14,000 juveniles of two salmon species, pink (Oncorhynchus gorbuscha) and chum (Oncorhynchus keta), sampling about 100 smolts every few kilometers along three migration routes that ranged from 40 to 80 kilometers long. Each route traversed channels with two or three farms, each containing about 600,000 Atlantic salmon (Salmo salar) in net pens.

The results showed that juvenile wild salmon do catch lice as they migrate past salmon farms. Based on a model accounting for factors such as smolt migration and sea lice dispersal and infection, the researchers found that salmon farms were the primary source of lice in the smolts and raised infection rates all along the migration routes. “Juveniles have to migrate through clouds of sea lice,” says Krkošek.

The results also showed that it doesn’t take many lice to kill juvenile wild salmon. The researchers collected nearly 3,700 smolts from the migration routes, counted how many lice they had, and then raised them in ocean enclosures. Whereas all of the lice-free smolts survived, most of those with two or more lice died within 50 days. This is not too surprising: at one to two centimeters, the lice are shockingly large compared to the up-to-eight-centimeter-long smolts.

The researchers are now investigating whether lice-ridden juveniles ultimately affect the abundance of wild salmon and whether juveniles can be protected from lice with chemical treatments or by fallowing salmon farms.