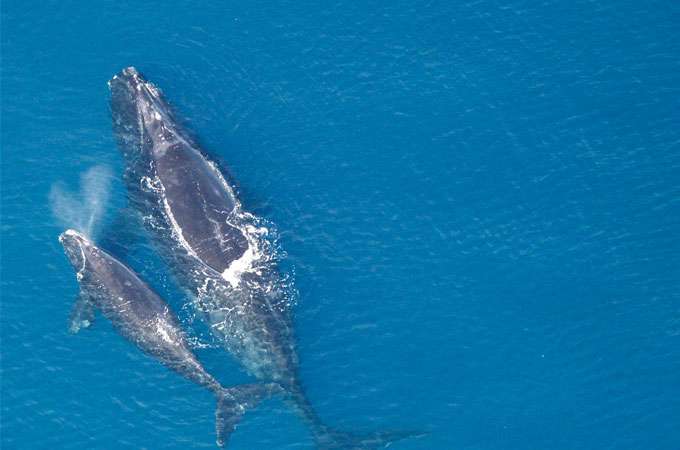 Lobster trap lines have long threatened the North Atlantic right whale in the Gulf of Maine. The thick lines, which extend from surface buoys to lobster traps on the sea floor, can injure or even kill whales by wrapping around their baleen and disrupting their feeding. Only 350 right whales now roam the North Atlantic, and as many as 75 percent become entangled. But there may be an amazingly simple fix to this dire situation.

New research shows that American fishermen could set far fewer traps and still catch just as much lobster. This is a “classic win-win situation,” say Ransom Myers of Dalhousie University in Canada and six coauthors in Current Biology.

They discovered that U.S. lobster fishermen were overdoing it. The fishery operates year-round on the U.S. side of the Gulf of Maine, compared to only six months on the Canadian side. And in 2003, the U.S. fishery set more than 3 million traps to land 25,000 metric tons of lobster, while the Canadian fishery set fewer than 400,000 traps and landed 19,000 metric tons of lobster. In other words, even though the U.S. fishermen worked twice as long and used about eight times as many traps, they caught only one-third more lobster than the Canadians.

The U.S. lobster fishery could sharply reduce its season and trap use without reducing its catch. Fewer traps means fewer lines to entangle right whales, and a shorter fishing season could be timed to decrease entanglement even further. Canada’s lobster season runs from late November through May, when right whales are rare in the Gulf of Maine.