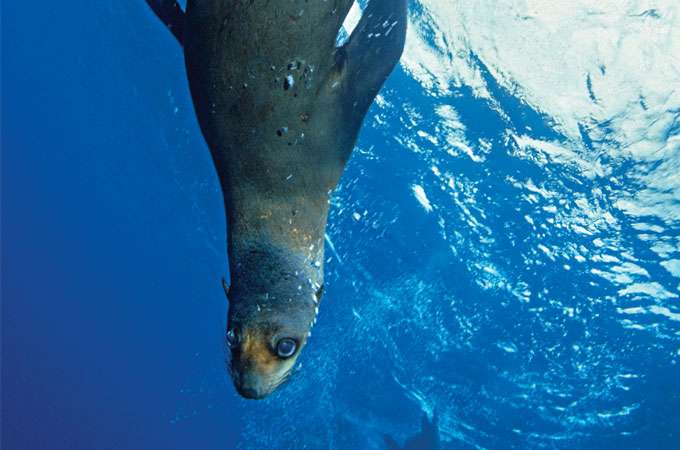 It seemed like the perfect conservation success story: after a Tasmanian trawl fishery was required to use nets with built-in escape hatches, the seal bycatch went way down. But new research shows that today’s bycatch is low even without the “seal-friendly” nets, raising the question of what’s really going on.

It turns out that, rather than using the escape hatches, fewer seals may be going into the nets in the first place, say Derek Hamer and Simon Goldsworthy of the South Australian Research and Development Institute in Adelaide in Biological Conservation. Knowing for sure why the bycatch is low—instead of jumping to conclusions—is important because these seal exclusion devices (SEDs) are now being proposed for other fisheries.

As pinniped populations recover and commercial fishing intensifies worldwide, more seals are being caught in nets. Seals are drawn to fishing nets for the easy pickings and can end up being injured or killed incidentally. Factory trawlers can be especially dangerous to seal populations because they work around the clock, making about three hauls each day. After factory trawling was first allowed in the winter blue grenadier (Macruronus novaezelandiae) fishery off western Tasmania in 1999, the average annual bycatch of Australian fur seals (Arctocephalus pusillus doriferus) increased six-fold, from 15 to 89. After the fishery was required to start using SEDs in 2000, the seal bycatch dropped by two-thirds. SEDs have two components: a stainless steel grid to keep seals out of the closed end of the net and an escape hatch about five meters in front of the grid.

To see whether these devices deserve credit for sparing seals, the researchers compared bycatch of experimental factory trawls with and without SEDs, monitoring a total of 49 daytime trawls. To see what was happening underwater, the researchers attached a video camera inside the net just in front of the seal-excluding grid.

The results showed that the SEDs did not affect the seal bycatch. With the devices, six seals were caught and three died; without the devices, seven seals were caught and four died. Rather, the camera revealed that hardly any seals entered the trawl nets. “The reduction in bycatch incidence may instead be due to the removal of habituated individuals . . . or to an overall reduction in the numbers of animals present in the region of the fishery,” say the researchers.

The camera also revealed that, contrary to previous assumptions, seals are vulnerable to trawling when the net is deployed, not just when the catch is hauled up. Indeed, net deployment accounted for half of the observed seal bycatch. Seals dive to eat “stickers,” fish from previous catches that are still stuck in the mesh, and possible fixes include removing the stickers or closing the net mouth during deployment.

This study also questions the current practice of hauling trawl nets to the surface as fast as possible. The researchers found that fewer seals were caught when the haul speed was reduced within their 200-meter diving range, presumably because they were able to outswim, and therefore escape, the nets. “Our most important finding is that other options are available to the fishery for mitigation of seal by-catch, not just the SED alone,” says Hamer.