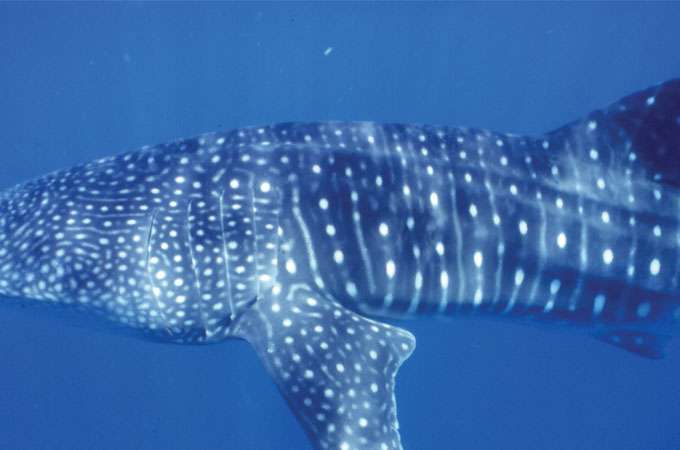 Astrophysicist Zaven Arzoumanian spends his days thinking about the stars, deciphering the murmured messages sent in x-rays and radio waves emitted by distant neutron stars and black holes. Marine biologist Brad Norman spends his days thinking about the ocean and studying the whale shark (Rhincodon typus), the world’s largest fish, as it plies the seas in its migrations between feeding and breeding grounds.

Computer programmer Jason Holmberg knows them both and brought them together to devise a rapid technique for mining information from whale shark photographs to make inferences about their population numbers and migration routes as well as other ecological trends relating to the sharks. Together, the trio transformed a powerful computer algorithm used to decode patterns in the stars into a new wildlife-management tool.

The algorithim quickly and accurately “reads” the spots on the flanks of whale sharks and thus identifies them. Accurate multiple sightings of whale sharks lie at the heart of learning more about their natural history in order to help in their global conservation, Norman says. Using the pattern-matching tool, scientists have learned that many sharks return to the same areas in Australia, the Maldives, and Honduras. And at least one area, Ningaloo Marine Park in western Australia, has been found to be an area where immature males congregate to feed—a likely critical habitat for this species.

Although using spots or other markings to identify animals is nothing new—cheetahs, giraffes, and zebras have all benefited from this approach—the power of the new algorithm is its speed. Scientists no longer need to pore over one photograph and compare it to a photo library of previously identified animals. Instead, the computer algorithm allows a photograph to be scanned into the system and compared to all previous shark photos in just minutes. The new photograph is saved in the library, which is Internet-accessible (www.whaleshark.org). Anyone can submit a photograph of a whale shark to the database; to date, 424 sharks have been identified out of a library of almost 1,500 submissions.

Holmberg became fascinated with whale sharks after swimming with one during a tropical dive. Curious, he eventually found Norman, a marine biologist affiliated with the Centre for Fish and Fisheries Research at Murdoch University in Perth who has devoted his career to studying the giant creatures.

Norman told Holmberg how little biologists know about whale sharks. No one knows where they breed or the duration and course of their migratory routes. No one knows their population size, although the International Union for the Conservation of Nature (IUCN) lists them as vulnerable. Even their maximum size is unknown, although their average length is thought to be between 5 to 8 meters.

What is known is that their spectacular size and gentle nature make them popular with divers and their long, graceful, gray bodies—peppered by thousands of white spots—make them particularly photogenic. Norman took that into account when, as part of his master’s research, he developed a technique for identifying individual sharks using the pattern of lines and spots on their skin. He created a library that enabled him to confirm resightings of sharks at Ningaloo Marine Park. Although it was effective, the technique was incredibly time-consuming because he had to match every photo by eye.

Looking at whale sharks, Holm-berg realized, was not unlike looking at the pattern of stars in the sky. So he contacted his friend Arzoumanian, an astrophysicist with the Universities Space Research Association at the National Aeronautics and Space Admin-istration’s Goddard Space Flight Center in Maryland.

“My initial reaction was that the pattern matching would be very hard. Even with flat images, automated pattern-matching techniques struggle with differences in orientation, contrast, and magnification between the two images,” Arzoumanian said. “And I felt that the complication of curved surfaces would make things too difficult.”

But another colleague, optical astronomer Gijs Nelemans, told Arzou-manian that star-pattern matching algorithms did exist. Holmberg and Arzoumanian eventually tracked down an algorithm written for the Hubble Space Telescope that fit their needs.

The algorithm doesn’t directly match images. Instead, the positions of stars are defined with x,y coordinates which are then combined in triplets to form a series of triangles. Geometrically similar pairs of triangles, one from each image, are then identified and compared in an iterative process that recognizes the points found in multiple triangle pairs, indicating that they are common to both images. After a year of tinkering, the scientists had an algorithm that was able to match whale shark photograph pairs accurately in more than 90 percent of cases.

When the trio published their results in the British Ecological Society’s Journal of Applied Ecology (1), they learned that whale sharks are not the only animals that might benefit from the pattern-matching algorithm. Spotted manta rays would be obvious candidates, but the technique could also work for others. Lions have a distinctly spotted muzzle, with each dot corresponding to the base of each whisker. And fishers, of the mustelid family, can be identified based on the pattern of dots on their paw prints.

But before Arzoumanian tinkers with the algorithm for other species, he has another assignment. For all the whale shark spots he’s seen in photos, he’s never seen the real thing. He and Holmberg have planned a trip to Honduras, to an area where whale sharks tend to be found. “This will be my first glimpse of a whale shark,” he said.