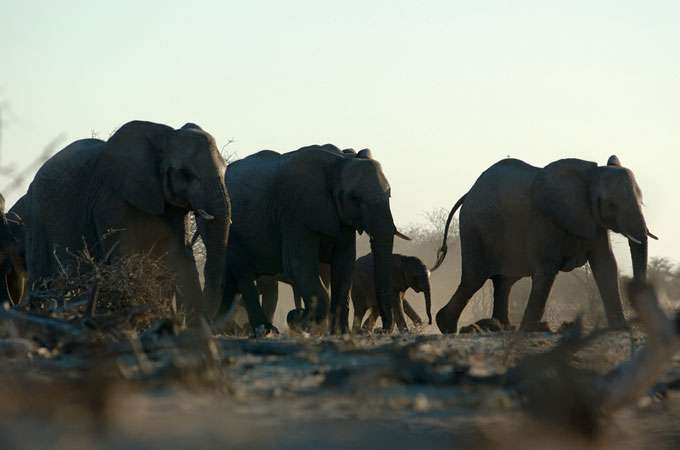 Now there’s a new way to survey elusive forest elephants: record their footsteps with underground seismic sensors called geophones. This method can distinguish elephants from other large animals more than 80 percent of the time and can also estimate herd size.

“Given this level of precision . . . our technique should be immediately useful to managers,” say Jason Wood, Caitlin O’Connell-Rodwell, and Simon Klemperer of Stanford University in the Journal of Applied Ecology.

Originally developed for oil exploration, geophones were adapted by the U.S. Army for tracking troops and vehicles during the Vietnam War. Likewise, the devices can detect the footfalls of large animals and are sensitive at distances of roughly 100 m, depending on the soil type (sound vibrations generally travel farther in rock than in sand). Moreover, the data collected by geophones could be linked to a satellite and downloaded remotely by managers.

To see whether geophones could be used to survey elephants, the researchers placed one of these devices near a major path leading to the Mushara Waterhole in Etosha National Park, Namibia. The 20-cm-long geophone was buried 15 cm deep and 1 m from the path. The researchers compared geophone recordings of footfalls from savanna elephants (Loxodonta africana) and five smaller, lighter species: giraffe (Giraffa camelopardalis), gemsbok (Oryx gazella), kudu (Tragelaphus strepsiceros), lion (Panthera leo), and humans. All together, 55 footfall recordings were analyzed: 31 from elephants, 12 from elephant herds (with up to 23 elephants), 3 from giraffes, 6 from gemsboks, 1 from a kudu, 1 from a lion, and 1 from a person.

The elephant footfall spectrum had a distinctive shape (it was longer and had the most pronounced low-frequency component) and contained more energy. Analysis of the footfall spectra accurately identified elephants 82 percent of the time: 40 out of 44 elephant footfalls were identified correctly, whereas only three of the footfalls from other species were misidentified as those of elephants.

In addition, the number of elephants could be estimated based on the energy of the footfalls. The herd-size estimates were rough because the energy of each footfall recording depends on the animal’s distance from the geophone. However, this could be corrected for by use of an array of, say, four geophones. Indeed, follow-up work with geophone arrays suggests that this approach does yield more precise elephant counts. Next, the researchers plan to use geophone arrays to estimate the size of a forest elephant (Loxodonta cyclotis) population in Central or West Africa.