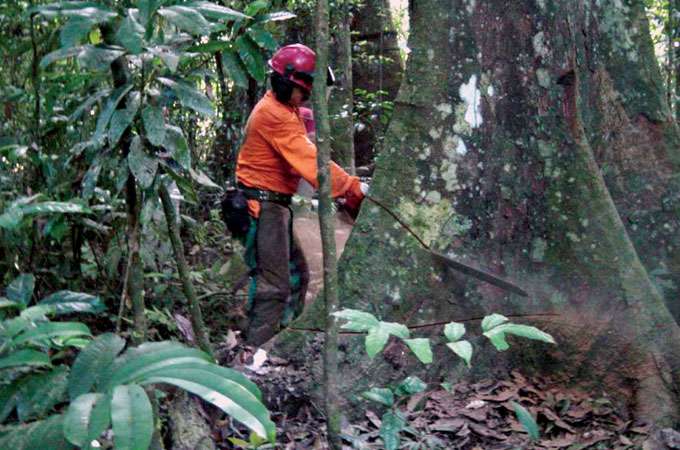 A new, high-resolution analysis of satellite images reveals that in the Brazilian Amazon, as much forest is lost to selective logging as to outright deforestation, such as clearcutting or burning.

“Selective logging has been mostly invisible to satellites,” say Gregory Asner of the Carnegie Institution of Washington in Stanford, California, and five coauthors in Science.

While deforestation is easy to monitor by satellite, selective logging has been harder to spot because the damage is at such a small scale. The ecological impact of cutting individual trees can be severe, however, in part because rainforest trees are linked by a network of sturdy vines. When a single large tree falls, it can pull down as many as 30 others. The researchers documented selective logging from 1999 to 2002 in the Brazilian Amazon’s top timber-producing states (Pará, Mato Grosso, Rondônia, Roraima, and Acre); these five states account for 90 percent of the region’s deforestation.

The Brazilian Amazon basin spans more than 4 million km2, and the CLAS analysis showed that selective logging damaged more than 46,000 km2 of forest in the five states during the three-year study period. For comparison, about 52,000 km2 were deforested during the study period, according to the Brazilian National Institute for Space Research. “Selective logging doubles previous estimates of the total amount of forest impacted by human activities,” says Asner.

The selectively logged and deforested areas are largely separate, overlapping by only 6 percent. The CLAS analysis also showed that, although most protected areas are not selectively logged, there are some notable exceptions. For example, up to 380 km2 of forest are lost each year to selective logging in Juruena, a federal forest reserve in Mato Grosso. This work also has implications for climate change. The researchers estimated that selective logging in the Amazon basin increases the amount of carbon released into the atmosphere by 25 percent, compared to the amount of carbon released by deforestation alone.