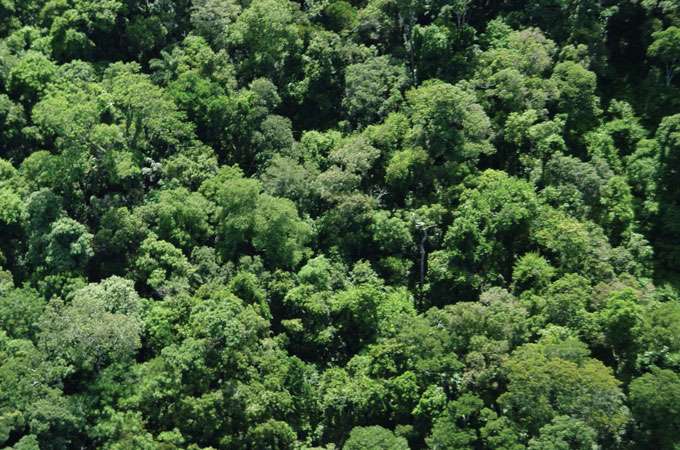 How well are we preserving tropical forests and their remarkable biodiversity? The first comprehensive assessment of changes in tropical forest cover has yielded both good and bad news: formally protected forests are largely stable, but the unprotected buffers around most have shrunk, increasing their isolation and decreasing their conservation value.

This research, which was featured in the Editors’ Choice section of Science, is reported by Ruth DeFries of the University of Maryland, College Park, and three coauthors in Ecological Applications.

Tropical forests contain most of the world’s biodiversity, including two-thirds of the plant and animal species. A key step in conserving this biodiversity is to identify forests that are rapidly being lost; both protected forests and their surrounding buffers are critical because the latter extend the effective area — and thus the conservation capacity — of the former.

To get a global view of how tropical forests are doing, DeFries and her colleagues used 20 years of satellite data to assess cover in and around 198 of the largest and best-protected tropical forests in the world. These areas were either nature reserves, wilderness areas, or national parks and had more than 60 percent forest cover in the early 1980s. Buffers were defined as being within 50 km of the formally protected areas.

DeFries and her colleagues found that protected forests have been quite stable overall. Cover was constant in three-quarters of them and losses were typically small in the rest, suggesting that “protection is generally effective in protected areas,” they say. There were notable exceptions, however — particularly in the dry forests of South and Southeast Asia.

In contrast, the buffers around two-thirds of the protected forests have lost cover over the last 20 years. Of these, nearly half have lost more than five percent of their cover and some have lost far more. For example, buffer cover has dropped by well over half both in Way Kambas, Sumatra, and in San Rafael, Paraguay (from 80 percent to 33 percent and from 91 percent to 41 percent, respectively).

“Despite little or no loss of forest habitat within their administrative boundaries over the past 20 years, reduction in forest habitat surrounding protected areas has reduced their capacity to conserve species richness,” say DeFries and her colleagues.