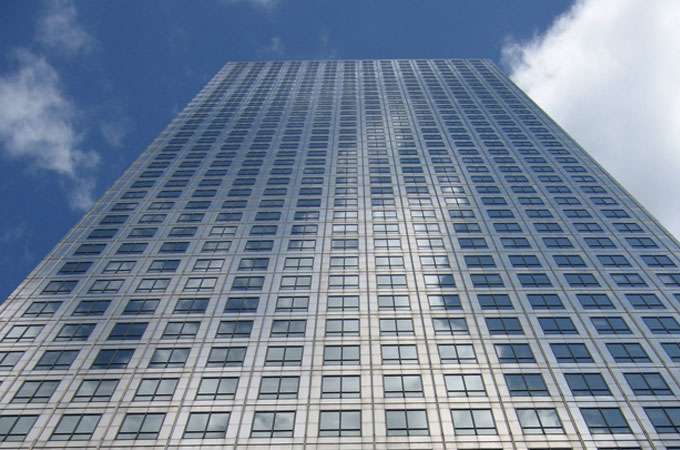 Dusty Gedge is an avid birdwatcher and former London street performer who has taken to the roofs of London—literally—to preach an unlikely gospel: he wants the city to convert up to 400,000 square meters of skyscraper and condominium rooftops into “living roofs,” where biodiversity can bloom and rare bugs and birds can find sanctuary.

Although the idea of transforming the equivalent of 75 American football fields of rooftop into planted habitat may sound far-fetched, Gedge’s ideas have already taken root, so to speak. The Canary Wharf Headquarters of Barclays Bank, London’s seventh-highest skyscraper, sprouted Europe’s highest living roof in July 2005 and was designed by Gedge as habitat for one of London’s rare birds.

Green roofs are becoming more and more commonplace across Europe and North America, but most are designed with an eye toward preventing stormwater runoff and reducing a building’s heating and cooling needs. What makes Gedge decidedly different is his focus on biodiversity as the key benefit provided by a living roof.

It all started with the black redstart (Phoenicurus ochruros), one of Britain’s rarer birds. Black redstarts have only just come to Britain within the last century. In Europe, these robin-sized birds nest on inaccessible rocky mountainsides or cliffs. In Britain, black redstarts find World War II bomb sites from the London blitz to be particularly alluring habitat, along with old brownfield and industrial areas. The common feature of these abandoned plots is that they are as arid as the Sahara and as rubble-strewn as the moon. But appearances can be deceiving. London’s abandoned places may appear unsavory and inhospitable, but they are the equivalent of the “English rainforest,” Gedge says with audible excitement. “They are seriously packed full of really rare species.”

Jamie Roberts, biodiversity project manager for Buglife International, a U.K.-based conservation group, concurs. He says the use of pesticides in the British landscape has eliminated much of the countryside’s native insect populations, so that brownfield sites have become “little havens of biodiversity.”

Six of London’s rarest inhabitants (BAP species, or species requiring nationally mandated Biodiversity Action Plans) are found in these abandoned lots, along with another 20 locally scarce species. Nationally, 12 to 15 percent of all rare invertebrates in Britain are found on the broken bits of habitat that are brownfield areas, according to a 2002 study.

At the same time, London’s abandoned wasteland is rapidly disappearing as the city’s real estate becomes ever more valuable. As a result, after a peak in the 1960s, the black redstart’s numbers have plummeted to fewer than 100 breeding pairs throughout the U.K. today, with just 8 to 12 pairs breeding in greater London.

So when Gedge, a volunteer for the London Biodiversity Partnership working on the Black Redstart BAP, found himself faced with the steam roller of urban development, he cast his eyes skyward in frustration and saw . . . roofs. Lots of them. A whopping 24,000 hectares of rooftops, an area 24 times larger than Richmond Park, London’s largest expanse of green. It was an “Aha!” moment.

“There was no way people were going to bend over backwards to save these old brownfield sites,” he said. “The roofs were the only option.”

Urban rooftops, particularly high rooftops, are almost-perfect substitutes for abandoned lots, Gedge realized. Skyscraper rooftops are arid; they’re baked by the sun and battered by nearly constant winds, neatly mimicking the scarred landscape of the typical urban abandoned lot. All that was needed was the right substrate to enable urban rooftops to act as proxies for the waste places below.

The trouble was, there was limited science to support Gedge’s brainstorm. In 1999, when Gedge first began thinking about harnessing roofs as black redstart habitat, only one European researcher, Swiss geographer Stephan Brenneisen, had studied biodiversity on extensive green roofs. “Everyone in the U.K. was telling me I was bonkers,” Gedge recalled. “So I got on a plane to Switzerland to meet Stephan.”

What he learned on this visit heartened Gedge. Among the more striking examples of how planted rooftops could work was the Moos filtration plant on the outskirts of Zürich. Five flat-roofed concrete storage tanks, each as big as a football field, were built in 1914 to supply the city with water. As the concrete tanks baked in the Swiss sun, the overheated water turned soupy green with algae. In a desperate move, managers shoved a thick layer of local soil onto each roof as insulation. It worked—and something magical happened. Although 90 years of development had eliminated much of the native flora found in Swiss lowland meadows, the tanks preserved one of the few remaining examples of wet grassland, a paradise of rare, green-winged orchids pollinated by unusual insects and visited by now-uncommon birds.

Gedge returned to the U.K. determined to put rooftops to work to protect the black redstart. By 2004, he had enlisted the owners of several London rooftops in his efforts, most notably the landmark Laban Dance Centre in Deptford. A 2002 study of eight London green roofs by English Nature, a government group responsible for protecting England’s wildlife and natural features, showed some success: although the relative number of invertebrate species on the roofs was low, they included several species rare or uncommon in London, many of which are specifically adapted to harsh, dry conditions. The design for the Barclays roof capitalizes on these habitat requirements. A mix of crushed brick and concrete provides substrate and is topped by a thin layer of soil seeded with wildflower mix. Circles of large pebbles inside the seeded areas provide bare habitat for insects that need a more arid environment.

Not surprisingly, a roof designed to mimic an abandoned lot isn’t exactly pretty. “It doesn’t sing and dance for you,” said Nita Patel, environmental manager for Barclays. But will the new roof really provide habitat for the black redstart? The answer isn’t clear yet. Gedge reports that one redstart has been sighted on the Barclays roof, which is being studied by a PhD student from the Royal Holloway College, London. Her study extends to a number of other living roofs and focuses on insects, but she is looking for signs of the elusive black bird with the red tail.

As for Gedge, he’s already got his eyes on his next conquest—the Hong Kong and Shanghai Banking Corporation (HSBC) building that’s visible looming above the Barclays roof. “If I could get HSBC, I would be over the moon,” he said.