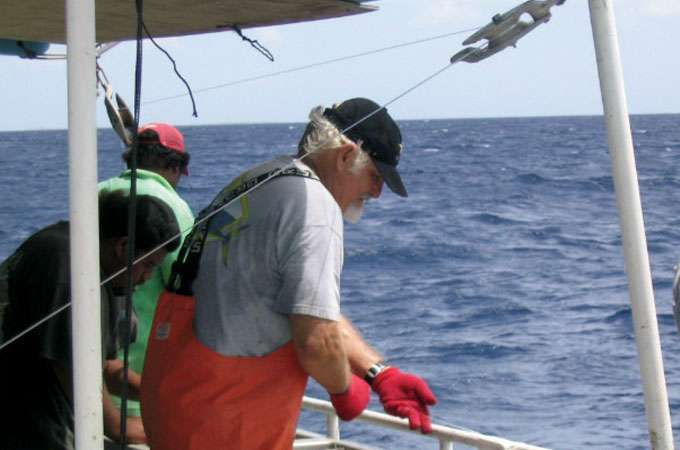 The life of an inventor is not easy. A prominent British physicist reportedly told Thomas Edison his light bulb was “a completely idiotic idea,” and physicists told Chester Carlson, the inventor of the Xerox machine, that his dry-ink transfer process could never possibly work.

So it should come as no surprise that Steve Beverly, the US$25,000-prize winner of a new international fishing gear competition to reduce marine bycatch, found the first reaction to his innovation was, well, skepticism.

Beverly, a fisheries development specialist from New Caledonia in the South Pacific, didn’t get discouraged. “My original idea had a few bugs — but I refined the idea and became convinced that it would work,” he said. His design prevents sea turtles from being caught by longline hooks.

Beverly’s clever idea is exactly the kind of eureka moment that sponsors of the International Smart Gear Competition were hoping to inspire. “We knew that fishermen in particular have incredible ingenuity and were behind many of the effective bycatch mitigation approaches already in use,” said Karen Baragona, deputy director of the World Wildlife Fund’s (WWF) U.S. Species Conservation Program, which organized the competition.

It’s not the usual job of a conservation group to sponsor design competitions, but when Baragona and her colleagues sat down with cetacean experts in 2002 to ask what the WWF could do to protect marine mammals, they were told that finding a way to limit bycatch would be the biggest help.

“They told us one of the most urgent needs was to support research and development of cetacean-safe fishing gear,” Baragona says. Thus the International Smart Gear competition was born. This past year’s competition, the first, brought 51 entries from 16 countries and from every continent except Antarctica.

WWF paired with leading research and fisheries organizations to create a judging panel to evaluate the varied submissions. Proposals included a simple bamboo ring to keep dugongs from swimming into Philippine fishing nets, glow-in-the-dark rope to warn whales away from gillnets, and lobster pots that eliminate anchor lines by floating themselves to the surface when a radio signal triggers the release of an airbag.

Beverly’s winning proposal is a modification of the longline gear used to catch tuna and swordfish. A traditional longline trawler catches fish by trailing a hooked and baited line that can be 65 km long. Beverly’s design eliminates hooks from the line that dangles in the top 100 m of water where turtles live.

Beverly’s idea won because it was practical, relatively easy to implement, and based on sound science, said Ole Misund, a judge and head of research for the Institute of Marine Research in Bergen, Norway. The impact could be enormous: longline fleets from 40 countries set an estimated 1.4 billion hooks in the world’s oceans each year — the equivalent of 3.8 million hooks every day.

By now, anyone who has bought a can of dolphin-safe tuna knows that accidental catch is a problem. But recent studies illustrate just how big a problem: in 2003, researchers from Duke University, North Carolina, and the University of St. Andrews in Scotland estimated that 300,000 whales, dolphins, and porpoises die annually from entanglement in fishing gear. A March 2005 study (again from Duke) estimated that more than 200,000 loggerhead turtles are caught each year in longline hooks, with the annual catch in the Pacific exceeding the number of nesting turtles.

Not surprisingly, the fishing community wants to eliminate bycatch, too. In addition to its obvious ecological harm, bycatch costs time and labor. Baragona said that many of the Smart Gear entries were from fishermen frustrated with bycatch who had tinkered with their own gear. “A lot of fishermen are using these ideas already and believe them to be effective,” she said. “It’s just that they haven’t gone through a formal process to commercialize their work.” The competition’s grand prize is designed to help inventors bring their ideas to commercial development.

That’s exactly what Beverly, a former commercial longline fisherman, was hoping for. From his years catching swordfish and tuna, Beverly knew firsthand what it was like to take a turtle from a hook. Listening to fisheries scientists talk about preventing sea turtle bycatch at a meeting in Hawaii in 2002, Beverly suddenly thought of a solution to the problem.

His idea, sketched on a piece of scrap paper while scientists fielded questions on the podium in front of him, was deceptively simple. A few modifications would keep the longline’s hooks below 100 m, out of range of turtles and birds but in range of swordfish and tuna. Colleagues who first saw his design gave him a dozen reasons why it wouldn’t work. He tinkered with it and tried again. Beverly convinced the Australian Fisheries Management Authority to fund a commercial trial, and in 2004, the longline fleet based out of Mooloolaba tested Beverly’s longlines with success. Now Beverly hopes his Smart Gear award will help spread his simple invention around the globe.

Although most boats fishing for tuna set their lines deep, they still leave a good portion of the hooks in shallow water, where they are likely to snare sea turtles. The mainline is suspended between two floats and sags in a curve, with the hooks at a variety of depths from near the surface to 300 m or more.

In Beverly’s design, the mainline is weighted and set such that the section that holds 40 to 60 hooks goes down to and remains below 100 m — safely out of sea turtle range, yet within target species range. Vessels that tested the design in Pacific waters caught 42 percent more tuna.

Smart Gear judges unanimously chose Beverly’s design as the grand prize because the idea is simple, inexpensive, relies on ecological research, and modifies existing gear so that fishermen don’t have to buy or train on complicated new gear.

For more information on other winning entries, visit www.smartgear.org