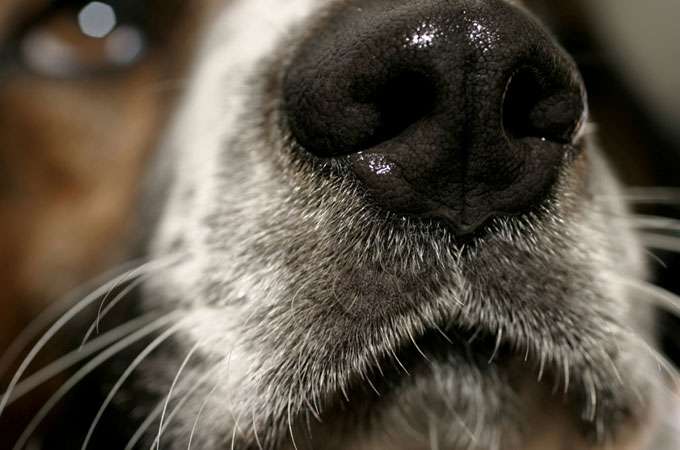 More employee than pet, Camas, a seven-year-old German shepherd, sniffs with precision. After hundreds of hours of training, she can distinguish between wolf and coyote scat, find endangered tortoises the size of a half-dollar under rocks in the Mojave Desert, and identify the scent of elusive black-footed ferrets (Mustella nigripes) in the midst of a hectic prairie dog town.

These are not party tricks. Teams from the Wildlife Conservation Society, Desert Research Institute, US Bureau of Land Management, University of Washington, and elsewhere are contracting for the services of Camas and her kennelmates from Working Dogs for Conservation, a nonprofit organization affiliated with the Denver Zoological Foundation. These wildlife scientists, looking for alternatives to invasive traps and expensive search crews, are finding an answer in the uncanny nose of a dog.

Camas was selected for her obsessive “play drive” by Alice Whitelaw, one of four field biologists who in 2000 founded Working Dogs for Conservation, now headquartered in Bozeman, Montana. “Being in the field with a skilled dog can be thrilling,” says Whitelaw. “But the point is, in the lab that scat can tell us a lot about an endangered or rare animal. For scat collection and other monitoring work, detection dogs are a good tool.”

Recent journal articles back her up. Writing in Science (1) and Animal Conservation (2), Deborah Smith, another cofounder of the organization, and Katherine Ralls, senior zoologist at the Smithsonian Institution, reported on their collaborative study of dogs trained to detect the scats of endangered San Joaquin kit foxes (Vulpes macrotis mutica) in California. Not only were the canines able to find scats in the field at a rate four times that of a skilled naturalist, but in a separate experiment, DNA tests of 1,298 scats showed that four dogs were 100 percent accurate at distinguishing kit fox scats from those of other species — even in areas rife with the alluring bouquet of coyote, badger, and skunk feces.

And scat is a pile of information. Amplification of DNA from cells sloughed off the intestinal lining not only can confirm species identity but also can be used to distinguish individual animals. Overlaid with geographic data, fecal analysis gives the researcher a portrait of habitat use, home range, population size, eating habits, kinship, and other demographic information critical for management.

Over the next three summers, Camas and her canine colleagues will be put to a hard test along the Idaho/Montana border. Here, Wildlife Conservation Society ecologist Jon Beckmann leads a project exploring how human activities, such as new-home construction, impact the movement of grizzly bears, black bears, mountain lions, and wolves. With help from Working Dogs for Conservation, he aims to learn whether the Centennial Mountains serve as a habitat connection — or a dead end — for these four carnivores. “This is pushing the limits of this technique, asking dogs to find scats from multiple species in a large landscape,” Beckmann says. Can they target several scent signatures at the same time, or “as we add cougars and wolves [to the scent training], will the dogs forget about bears?”

At US$400/day for a dog and handler team, finding out will not be cheap. “Compared to a GPS collar study the price per unit data is high,” says Beckmann. But as he points out, getting a collar onto a grizzly bear (Ursus arctos horribilis) is no walk in the park, and the overall costs of using dogs versus other techniques (such as hair snares and radiotelemetry) still remain to be studied closely. Avoided costs complicate the ledger book; in their study, the kit fox researchers estimate that using dogs to pre-screen samples would have avoided US$6,000 in DNA testing of nontarget sympatric red fox scat.

In recent decades, dogs have been trained to sniff out lost mountain climbers, illegal drugs, gas pipeline leaks, and even cancer cells. But the science of training dogs to hunt for conservation targets is young, and new applications are emerging. With help from Working Dogs for Conservation, a Montana State University researcher hopes to use dogs to find new outbreaks of invasive knapweed before it sets seed; the U.S. Geological Survey recently deployed dogs (through a co-contract with WDC and DogWerks All Breed Training) to Guam to help prevent the inter-island spread of exotic brown tree snakes (Boiga irregularis); and, last year, Working Dogs for Conservation staff went to the Russian Far East to collaborate with scientists who are using dogs to discern individual Amur tigers (Panthera tigris altaica) by smell. Detection dogs trained by the New England Aquarium are even proving effective in finding right whale (Eubalaena glacialis) feces afloat on the sea.

Joshua Brown is a freelance writer based in Burlington, Vermont.