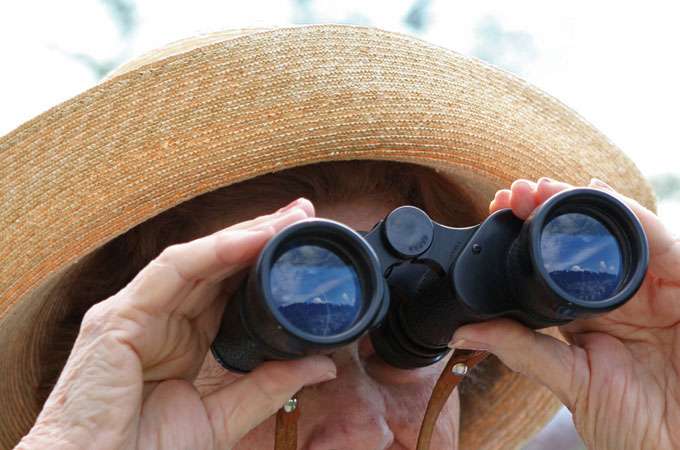 Paula Sullivan’s backyard in Alexandria, Virginia, sits on a cul-de-sac six blocks from the Interstate highway and a few miles from Reagan National Airport. It’s not exactly where John James Audubon would have taken out his paint box.

But for house wrens (Troglodytes aedon) looking to nest, this suburban plot may be the most natural backdrop they can find. For ornithologists from the Smithsonian Migratory Bird Center, it’s one of 200 field sites established through Neighborhood Nestwatch, a first-of-its-kind project that explores the effects of urbanization on birds by studying them in people’s backyards.

Nestwatch stands out from the myriad of citizen science projects that have sprung up in recent decades. Its innovation is that it gives scientists access to usually off-limits private land for their own research.

The idea was conceived by Smithsonian senior scientist Peter Marra, who spent years looking for birds in some of the most remote wildlands of the Americas. Now, responding to the entrenched bias in wildlife research toward more pristine habitats, he has turned his conservation eye toward another jungle: the concrete one.

“It’s not much fun to drive into downtown Baltimore to go to a study site that is mostly pavement, hoping to catch a catbird in a Japanese honeysuckle bush,” he says. “But outside of refuges, this is the reality of where we are going with our environment.”

It is well known that sprawling land conversion along the eastern seaboard of the U.S. has led to the decline of many songbirds. But with only a trickle of research funding being directed toward understanding these highly modified habitats, biologists are largely in the dark about the dynamics of and threats to bird populations that persist in cities and subdivisions.

The house wrens in Paula Sullivan’s yard help to shed some light. They are among 5,000 birds that have been banded through Nestwatch. Every spring since the program began in 2000, a field crew has shown up at her house with mist nets. Stretching the thin mesh between two poles across the grass, they catch, weigh, bleed, and leg-band birds that fly from her bushes.

For Sullivan, an avid birder, this adds color—literally—to the birds she sees out her back window. “It’s thrilling to see the bright bands on their legs and know they made it for another year,” she says. She collects data on the nesting behavior of these birds and seven other common species that occur in an urban-to-rural gradient from Washington, D.C., to forest tracts in Virginia and Maryland. She relays the data through a website to Marra’s team at the Smithsonian.

Back in the lab, the data she and other Nestwatch households have been collecting get interlarded with the scientist’s more skill-intensive blood analyses, population studies, and computer modeling to yield some new and surprising insights.

Using artificial nests with clay eggs at randomly selected participants’ backyards, the Smithsonian team tested the prediction that nest predation—measured by predator imprints in the clay—would be higher in more urban environments. The opposite proved true. Although the habitat may be superior in more natural areas, rural birds’ eggs were dined on more often, due to a greater diversity of predators from raccoons to crows.

Or, take the case of West Nile virus. In collaboration with the New York State Department of Health, the Wildlife Trust, and the Consortium for Conservation Medicine, Nestwatch blood samples are helping unravel the complex epidemiology of this disease. It appears that nonnative house sparrows are an important reservoir for the virus and that the prevalence of the disease increases along the urbanization gradient. In short, urban sprawl changes the composition of bird populations, giving West Nile virus favorable conditions for growth.

Another Nestwatch study is using radiotransmitters to track catbirds. The results show alarmingly high rates of mortality during the fledgling period, suggesting that suburban areas are a dead end for many birds. Their killer? Domestic cats, says Marra.

Joshua Brown is a freelance science writer based in Burlington, Vermont.