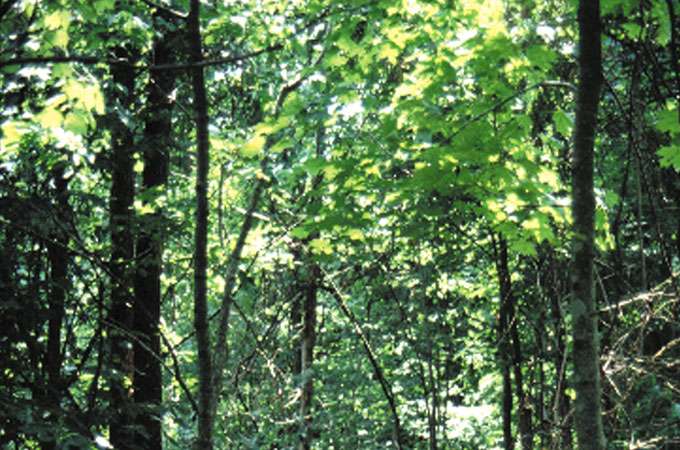 Despite the fact that strip mines can destroy entire mountain tops in the Appalachians, mine reclamation mandates focus on short-term fixes instead of ecosystem restoration. New research shows that although reclaimed mines can look good, even after 30 years they are still missing about half of the plant species found in unmined forests.

“More emphasis should be given to long-term recovery potential in developing mine reclamation plans,” says Karen Holl of the University of California, Santa Cruz, in the December issue of the Journal of Applied Ecology.

Efforts to reclaim strip mines are legally required to protect water quality by controlling erosion. Since the late 1970s, this requirement has been met by planting a few types of rapidly growing grasses and legumes, most of which are non-native. The problem is that these non-native plants can keep native species from becoming established, thus keeping the ecosystem from recovering. Moreover, most mines in Virginia have also been legally required to provide 1,000 trees per hectare. This requirement has been met by planting fast growing, commercially valuable Eastern white pine (Pinus strobes), which is native to the southeastern U.S. but is uncommon in the state.

To determine how strip mine reclamation affects plant conservation, Holl compared the vegetation on 19 reclaimed mine sites with that on five unmined sites in the deciduous forests of southwest Virginia’s central Appalachian coal-bearing region. The mine sites were reclaimed between 1962 and 1987, and the unmined sites had previously been logged. Holl surveyed the sites’ vegetation twice (first in 1992 or 1993, and again in 1999), determining both the number of plant species and the percent cover of three vegetation categories (herbs, shrubs, and trees).

Holl found that the mine sites that were reclaimed about 30 years ago had about as much herb and tree cover as the unmined sites, suggesting that Appalachian forest ecosystems are quite resilient. However, rapid growth of cover does not necessarily mean ecosystem recovery. Holl found that these reclaimed mine sites still lacked many plant species. Specifically, the reclaimed sites had only 54 percent as many herbaceous and 62 percent as many woody species as unmined forest. The plants that were “missing” from reclaimed sites were generally rarer and included herbs with seeds dispersed by gravity or ants. “This study…raises the question of the value of such reclamation efforts for conserving rarer species,” says Holl.

Holl’s recommendations for increasing the diversity of forest plants on reclaimed strip mines in the Appalachians include:

A site reclaimed circa 1967 prior to mining legislation. It was seeded with black locust and a less aggressive erosion control mix. Photo by Karen Holl