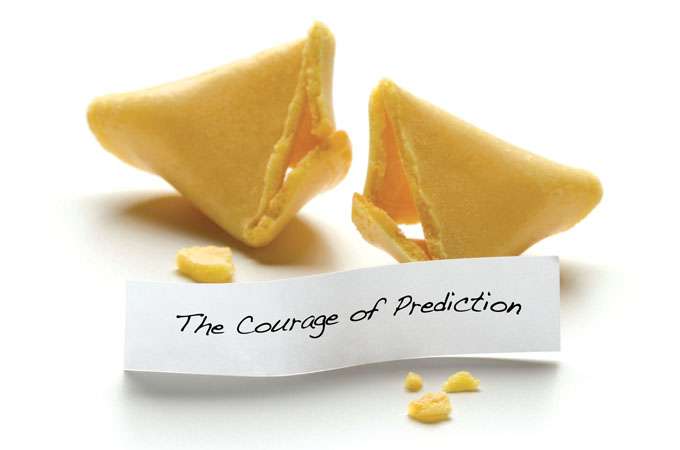 The Courage of Prediction

If, like me, you have a cynical streak, then you may share my suspicion of the process through which raw data are munged by statistical machines into trend charts with giant error bars, then distilled by policymakers into dollops of wisdom. Misplaced faith in oversimplified models, after all, has produced some whopping mistakes. Paul Ehrlich’s “Population Bomb” from the 1960s never fell. In the following decades, it was defused by advances in technology and retreats in fertility that ecologists failed to anticipate. In the late 1970s, geologists trumpeted warnings of oil production nearing its peak. Yet petrochemical companies now milk the Earth for one-third more oil than they did in 1980. And in the 1990s, fishery biologists unwittingly abetted the spectacular destruction of the Grand Banks cod fishery by basing their catch recommendations on mathematical models many knew to be flawed.
So this summer, when I picked up a copy of Useless Arithmetic: Why Environmental Scientists Can’t Predict the Future (1) by the father-daughter team of Orrin H. Pilkey and Linda Pilkey-Jarvis, I was primed for the message promised in their title. Might there be some inherent inscrutability to nature that creates an environmental counterpart to Heisenberg’s Uncertainty Principle in physics and Gödel’s Incompleteness Theorems in math? In their book, the Pilkeys recite instance after instance of failed predictions, then conclude that nature is simply too complex to be squeezed into a quantitative mathematical model. Environmental scientists, they argue, should instead content themselves with a qualitative approach that is limited to observation and only general speculation about the future.

Yet the further I read, the more I became convinced of almost exactly the opposite. The Pilkeys were unable to point to any truly irreconcilable conflict between quantitative modeling and environmental science. And the litany of real-world failures they recount actually exemplifies just how inextricably the power of conservation depends on our ability to make useful predictions. Yes, that ability is sorely lacking today. The answer, however, is not to give up hope but to redouble our efforts.

Politicians in the hot seat and information-hungry media machines want prognoses for our ailing world—not just for this rainforest and the next year, but for the entire globe over as much as a century to come. The demand for answers to the questions “How fast will it get worse?” and “Will this make it better?” will not go away. Nor should conservationists wish it to. The very demand is a sign that a society wants to manage its environment based on sound science rather than ideology or religion. That hasn’t always been the case, and environmental stewardship has improved since this urge appeared.

Granted, there is a tension between what societies demand and what conservation biologists can supply. But it is just that—a tension, not a true dilemma. As the underlying science firms up, the tension will dissipate.

The long debate over global warming offers an encouraging example. “What do you make of this whole global warming idea,” my grandfather asked me with a dubious tone in his voice a decade ago. “The warming is real enough,” I answered, “but the jury still seems to be out on how much of that we’re causing.” Back then critics were pointing, and rightly so, to questionable assumptions, wide disagreement among models, a lack of transparency, and some overly confident public statements by climate scientists.

But the climate-science community gradually resolved most of these issues, thanks in no small part to the consensus-building efforts of the IPCC (Intergovernmental Panel on Climate Change). Field observations improved dramatically with billion-dollar investments in data-collecting satellites, ships, balloons, and airplanes. Models grew more sophisticated as nations built custom supercomputers to run them and as modelers interlinked their simulations into more-robust ensembles. Climate researchers became less secretive and took greater care to explore and explain the various sources of uncertainty in their projections. In just 20 years, these advances largely ended the debate over the reality of global warming. Consensus has even begun to emerge on just how much we’ll have to reduce emissions reductions to hold warming to a tolerable level.

Conservation modelers are now where climate modelers were 10 or 15 years ago. On the one hand, the tools for predicting where and how fast invasives will spread, whether fish stocks will recover, or whether endangered species will disappear are relatively primitive—and overly confident predictions based on shaky models have undermined credibility. On the other hand, the field seems poised for a boom in data-gathering technology similar to the one that gave climate science such a boost in the 1990s.

From sensor mote networks and GPS-enabled radio tags to high-resolution satellite imagery and DNA-scanning species identifiers, the tool bag for collecting ecological and earth science data is bursting at the seams. And the computing systems to manage, analyze, and communicate those data are improving at an impressive rate. As the computational arm of conservation biology matures, theorists can test their hypotheses more quickly and robustly and can reject wrong ideas more easily. To take advantage of all this technological potential, however, conservation biologists must aspire to have the courage of prediction.

Projects such as the nascent National Ecological Observatory Network (www.neoninc.org) suggest that at least some do. NEON plans to deploy huge numbers of environmental sensors from one coast of North America to the other, creating an infrastructure for ecological observation and experimentation. The observatory will produce a constant flow of quantitative measurements to track the spread of disease, invasive species, and other ecological threats. NEON’s explicit goal is to “enable the mechanistic and predictive understanding required for forecasting.”

The more adept we become at the science of prediction, the more we will need to master the art of communication. One of the secrets to the IPCC’s success has been its use of scenarios to help explain the range of climate projections. By framing futures in the form of stories, the scenarios capture the uncertainty built into the forecasts—guesses about how much the population will grow, incomes will rise, transportation and energy technologies will change, and so on.

Yes, the media still oversimplify the results and report a single “most likely” number for mean temperature increase or global sea level rise in 2050. Yet if I were to ask you by how many degrees the global mean temperature will be different in 2100 if things go the way they have been, according to the most recent IPCC projections, you probably could not give that number. But I’d bet that you do know that it is positive and not negative and that it is between 1 and 10 degrees Celsius, not between 10 and 100 degrees Celsius. More importantly, you probably know that it is great enough to change the strength and frequency of storms and droughts, to melt glaciers and ice caps and sea ice, and to alter growing seasons and spur summer heat waves.

These highly quantitative climate models, in other words, have created among the public an appropriately qualitative understanding of the global climate trajectory and its likely impacts.

Whether the world acts on that understanding in time to change the trajectory is, of course, impossible to predict. Or is it?

W. Wayt Gibbs is a freelance science writer and executive editor at Intellectual Ventures in Bellevue, Washington. He is also a contributing editor for Scientific American, where he worked as a staff writer and editor from 1992 to 2006. His work has been honored by the National Association of Science Writers, the Wistar Institute Science Journalism Award, and the American Association for the Advancement of Science (AAAS) Science Journalism Award.