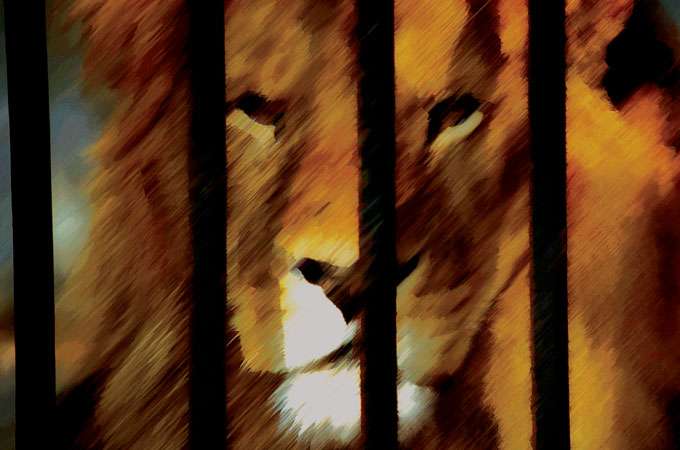 We’ve all seen a Barbary lionóat least, a three Studios lion, the one with the magnificent beginning of classic movies, is thought to have been a Barbary—a large subspecies of the African lion Panthera leo leo that once lived from Morocco to Egypt. This was the lion that fought gladiators and ate Christians in the coliseums of the Roman Empire, that Crusaders hunted and whose image they wore in heraldry on their shields. Barbaries were among the most striking of all the world’s 12 or 13 races of lion—exceptionally large, with males reaching 500 pounds and ten feet in length, and bearing a heavy, dark mane that stretched all the way along the belly to the groin. A typical savanna lion from the rest of Africa weighs about 350 pounds and has a sparser, tan-colored mane; some populations lack the mane almost entirely.

But as human populations rose and guns spread through the region, Barbary lions (also known as Nubian or Atlas lions) became rarer and rarer. They were gone from Libya by the eighteenth century, and the last Tunisian specimen was killed in 1891. Finally they were forced back up into the Atlas Mountains of Morocco, where the last was shot in the 1920s. For nearly 80 years, everyone assumed that P.l. leo was extinct; unlike many big cats that have vanished, there wasn’t even a sniff of a rumor from the wild to keep hope alive. Nor was the Barbary the only lion subspecies to suffer this fate. The Cape lion of South Africa, P.l. melanochaita, was shot out of existence in the nineteenth century; like the Barbary, it was adapted to a higher, colder climate than the typical lion and so was larger and more heavily furred.

Sometimes a lost species reappears, like a vision, in a wilderness setting; sometimes it winds up dead next to a ranch dog’s dish, like the black-footed ferret. The lion of the Romans made such a less-than-regal entrance. In 1996, the owner of the itinerant Akef Egyptian Circus—a motley collection of performers, big cats, livestock, and pythons—abandoned his bankrupt enterprise in Mozambique, one step ahead of authorities who believed his main occupation was trafficking in chimps and other endangered species. Among his sick and malnourished charges were three lions which eventually found their way to the Hoedspruit Research and Breeding Centre for Endangered Species in South Africa, which specializes in working with large carnivores like wild dogs and cheetahs.

It wasn’t until the cats were at Hoedspruit, though, that staffers realized that one male, named Giepie, was a lot bigger, shaggier, and darker than most African lions—he was, in fact, a dead ringer for the supposedly extinct Barbary lion. As word of the find spread, zookeepers around the world began to reexamine their own lions, some of which had Barbary-like manes, leading to the suspicion that they could be descendants of Barbary lions captured decades ago. The Rabat Zoo in Morocco has two dozen, descended from a royal collection, while a zoo in Addis Ababa, Ethiopia, has eleven lions that were once the living symbols of Emperor Haile Selassie until a coup toppled “the Lion of Judah” from power in 1974. A South African scientist named Hym Ebedes believes the Ethiopian cats may also be Barbaries, while another South African, zookeeper John Spence, recently announced that two cubs at a zoo in Siberia were in fact the long-lost Cape lions.

Or not. No one knows where the circus lions came from, and zoo lions from many sources have no doubt interbred for generations, blurring any regional distinctions their ancestors may have once have had. The dark-maned captives of today may be nothing more than an accident, a genetic hiccup. To find out, Oxford University scientists have begun to examine DNA from old skeletal specimens of undisputed Barbary lions, comparing it to the genes of sub-Saharan races of lion in the hope of finding unique genetic markers that would distinguish the northern sub-species—and, perhaps, put a firm identity on the Barbary-like captives and then pinpoint which have the purest bloodlines to preserve through captive breeding.

But should the lions prove to be the real McCoy, a stickier problem arises—what to do with them. Morocco has designated 40,000 hectares in the Atlas Mountains as a release site, hoping the cats could become a tourist attraction, while others have advocated placing the Barbaries instead in South Africa’s highlands, as a near-replacement for the extinct Cape lion (assuming, that is, that the cubs from Siberia do not prove to be a reincarnation of that animal). But talk of reintroduction skirts the far greater problem of behavior: after generations in captivity, the lions in question have lost any sense of how to survive in the wild—those from the circus in Mozambique, which had spent their entire lives in cages, were terrified of moving leaves and running water when first released into open enclosures. Large social predators such as lions depend on teaching—a cultural transfer of information between the generations—to turn an inexperienced youngster into an efficient hunter. Happy thoughts of Born Free aside, this is a nearly impossible process for humans to duplicate. Sometimes, snatching a vanishing species from the maw of extinction is the easy part.

Scott Weidensaul is the author of more than two dozen books on natural history. His newest book, Of a Feather: A Brief History of American Birding, is published by Harcourt (2007).