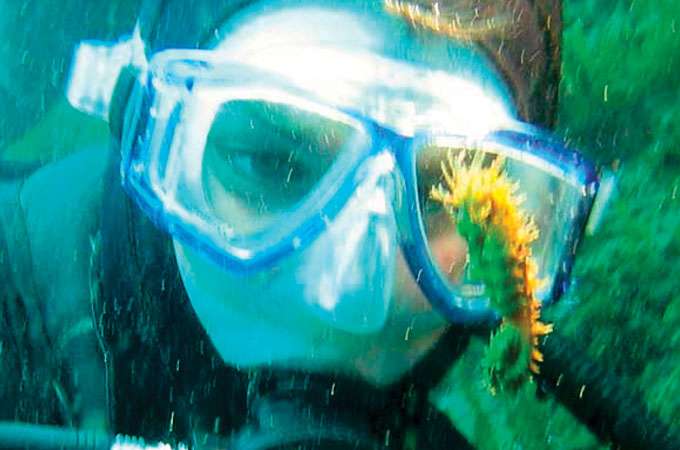 Rather than being just a feel-good activity, conservation volunteering can make a real difference. The first step in protecting biodiversity is figuring out what species live where, but this can be an overwhelming task because time and funds are limited. A new report shows that volunteers can help on both counts: recreational scuba divers monitored seahorses in Italian waters quickly and cheaply.

There are 32 species of seahorses worldwide, and many have declined drastically due to habitat degradation and overfishing. Some populations have dropped by half in just five years. Seahorses are fished for the aquarium and curio trades and are used in traditional Southeast Asian and Chinese medicine for respiratory problems and impotence. There are two Mediterranean species of seahorses, Hippocampus hippocampus and Hippocampus ramulosus, and they have not been comprehensively assessed in Italian waters.

To see whether volunteers can help researchers monitor seahorses, Goffredo and his colleagues established the Mediterranean Hippocampus Mission. This effort entailed using scuba-diving schools to recruit and train recreational scuba divers to learn how to distinguish between the two seahorse species (H. ramulosus has a “mane,” while H. hippocampus does not) and to fill out questionnaires for reporting the depth, habitat, number, and species of the seahorses they saw. To encourage divers to monitor less-popular sites such as those with cloudy waters, the project offered incentives, including subscriptions to recreational diving magazines and discounts on room and board.

During the three-year project, more than 2,500 volunteers dove for more than 6,000 hours and submitted nearly 9,000 questionnaires, about one- tenth of which reported seahorse sightings. Goffredo and his colleagues calculated that it would have taken a professional researcher 20 years and $1.3 million to collect these data.

Among other things, the findings show that seahorses are rare in the northwestern Mediterranean, where the seagrass meadows favored by one of the seahorses (H. hippocampus) have been diminished. Threats to the seagrass include an invasive tropical seaweed as well as industrial pollution, port construction, and other human disturbances. “The meadows are listed today among the ocean’s endangered natural habitats and are mentioned in the Directive on Habitats of the European Union as one of the ‘priority natural habitats’ whose protection requires the designation of special areas of conservation,” says Goffredo.

The success of the seahorse project led Goffredo and his colleagues to expand their volunteer monitoring effort to include 61 plant and animal species. Their current effort, Diving for the Environment: Mediterranean Underwater Biodiversity Project, involves volunteer scuba divers who have submitted nearly 13,000 questionnaires reporting sightings over three years. “We calculated that a professional researcher would have taken 30 years to compile this impressive amount of information and that the sampling missions would have cost over US$2 million,” says Goffredo.

Goffredo, S., C. Piccinetti, and F. Zaccanti. 2004. Volunteers in marine conservation monitoring: A study of the distribution of seahorses carried out in collaboration with recreational scuba divers. Conservation Biology 18(6):1492-1503.