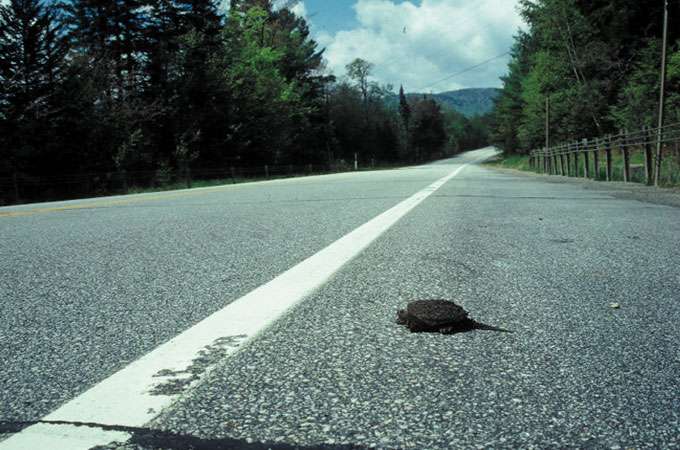 Too Many Turtles May End Up as Roadkill

Turtles and roads are a bad combination. Nearly half of the 55 turtle species native to the U.S. are declining, and new research suggests that collisions with cars and trucks are partly to blame.

“Our work provides a compelling explanation for the bewildering decline of turtles, particularly the mobile land turtles and semi-aquatic species,” says James Gibbs of the State University of New York in Syracuse, who presents this work with SUNY colleague Gregory Shriver in the December issue of Conservation Biology.

The U.S. has among the highest turtle diversity in the world, and all tortoises and about a third of aquatic and semi-aquatic species are in trouble. One reason may be roads — turtles wander daily to find food and migrate seasonally to lay eggs or escape climate extremes such as drought and freezing temperatures.

Gibbs and Shriver simulated the movements of three groups of turtles: land turtles and large and small pond turtles. To estimate the likelihood that turtles would be hit while trying to cross roads, the researchers integrated the simulated turtle movements with road densities and traffic volumes for each state. Roads are estimated to directly affect about one-fifth of the land in the contiguous U.S.

The results suggest that roads threaten both land turtles and large pond turtles: in many regions more than 5 percent of these turtles are likely to die while crossing roads, which is a death rate more than these populations can sustain. Other studies have shown that most turtle species cannot withstand death rate increases of more than 2-3 percent. Turtle roadkill was particularly high in the northeast, southeast, and the Great Lakes-Big Rivers region, which is where U.S. roads and traffic are most concentrated.

However, Gibbs and Shriver point out that even small pond turtles may be threatened by collisions in heavily roaded and trafficked areas. “Daily traffic volumes typical of many major and arterial highways suggest that such roads are essentially impenetrable…to any wandering turtle,” they say. To help protect pond turtles from collisions in developed areas, the researchers recommend establishing buffer zones around aquatic habitats.

Protecting land turtles from collisions will take more than this, however. Because these species need large areas of continuous habitat (roughly 2,000 acres for a population of 500-1,000 turtles), “land-use planners should perhaps consider near roadlessness as a criterion for habitat suitability for land turtles,” say Gibbs and Shriver. “This perhaps places land turtles…in the company of grizzly bears and gray wolves as fauna for which road networks may be a key limiting factor to population recovery efforts.”

In areas where buffer zones and large roadless areas are not feasible, turtles could be protected from collisions by building road crossings. This work is “some of the first to suggest that road crossings and other expensive road alterations may well be justified in terms of population persistence,” says Gibbs. Next, he and Shriver plan to address this issue for amphibians.