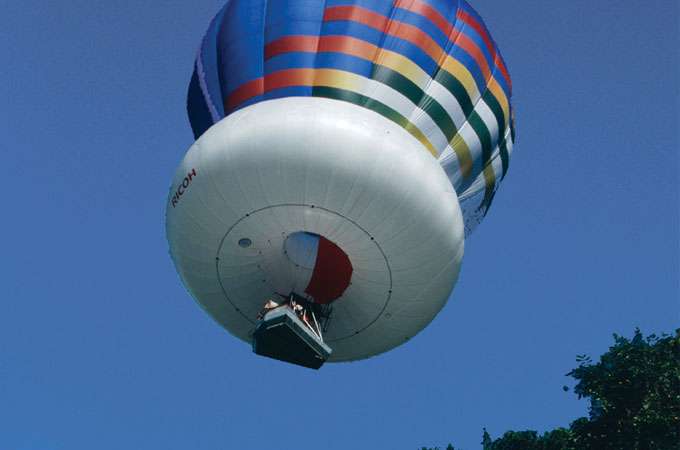 Now Pro-Natura International, a private French research organization, has literally floated into the picture with an approach that draws on The Wizard of Oz. They’ve developed a cross between a hot air balloon and a dirigible: a helium-filled, fabric doughnut fitted with gas-powered horizontal thrusters and nestled around a 25-meter-tall hot-air balloon. The “canopy glider” allows up to three researchers to hover in a basket over the treetops or descend into the canopy, opening up a rich arena of the living world.

“If you assume that 70 percent of terrestrial species live in tropical rainforests, and half of those species live in canopies, then this is a huge part of biodiversity,” says Olivier Pascal, program director for Pro-Natura.

Starting some 40 meters from the ground, tree canopies are frustratingly difficult to reach, says S. Joseph Wright, senior scientist at the Smithsonian Tropical Research Institute in Panama. But some of the most interesting and elusive activity takes place at the tips of branches, whether it’s an insect pollinating a flower or a leaf’s photosynthesis in the full sun. Those branches are simply too slender to bear the weight of climbers, and nearly every other way to reach them disturbs the environment and its inhabitants, Wright says.

With tropical forests under siege around the world, biologists don’t want their studies to do any more damage than necessary. Nevertheless, fogging the canopy with insecticides has been a common treetop sampling technique. Smithsonian researcher Terry Erwin famously employed it in the late 1970s, with one species of tropical forest tree yielding more than 1,000 mostly undescribed species of insects. Botanists have also had a tradition of using chainsaws to get at hard-to-reach epiphytes, although these days they follow road builders who fell trees. “When an oil company opens a new road in a primary forest, the botanists are all right there to assess the impact and collect specimens for the national herbarium,” Wright says.

Less destructive approaches include the use of construction cranes for canopy access, pioneered by the Smithsonian in the early 1990s. These, too, have their limits. Cranes are fixed and allow access to only a hectare of forest, or about 180 canopy trees. In the 1990s, Pro-Natura helped pioneer a “canopy raft,” a mesh structure lowered directly onto a treetop by a hot air balloon; however, it had the potential to damage the canopy or scare away creatures. Floating just over the canopy in the glider will hopefully circumvent those problems.

The canopy glider’s maiden voyage was in the Vanuatu islands of the South Pacific in 2006. Later this year, the glider is going to Lamington National Park in Australia. Already, a team of 40 researchers from nine countries is at work in the park on an IBISCA (Investigating the Biodiversity of Soil and Canopy Arthropods) project to study biodiversity and species competition along an altitudinal gradient in one tropical rainforest watershed. Researchers are also looking along the gradient for organisms that might serve as indicators of global warming. To that end, in October 2006, researchers established 20 permanent plotsófour at each of five altitudes from 300 to 1,000 meters above sea levelówhere the glider will be used in 2007 to sample the uppermost parts of the canopies for plants and insects.

The glider “will add another layer” to the research, says David Putland, senior research assistant with the IBISCA Queensland project. “We can look at pollination and pollinators, things that need full sun . . . This is the ideal tool to get at this.”

The glider’s main drawback is that it cannot operate when it is windy. In fact, one of the glider’s propellers was damaged during its Vanuatu flight, delaying its deployment to Queensland by several months. The delay, and the thrill of flying, has Pro-Natura’s Pascal eager to resume the research. Floating over the organized chaos of tropical forest treetops “is Zen flight,” he says. “There is this feeling in the glider that you are weightless…you have this feeling of levitation. Apart from its scientific quality, it is really fun.”